Fact Check: No, this Thane lab is not sealed over false-positive COVID19 testing

No, this lab in Thane has not been sealed as claimed in the viral post.. TMC has not sealed the lab, it has issued the notice seeking clarification on the irregularities in the reports. 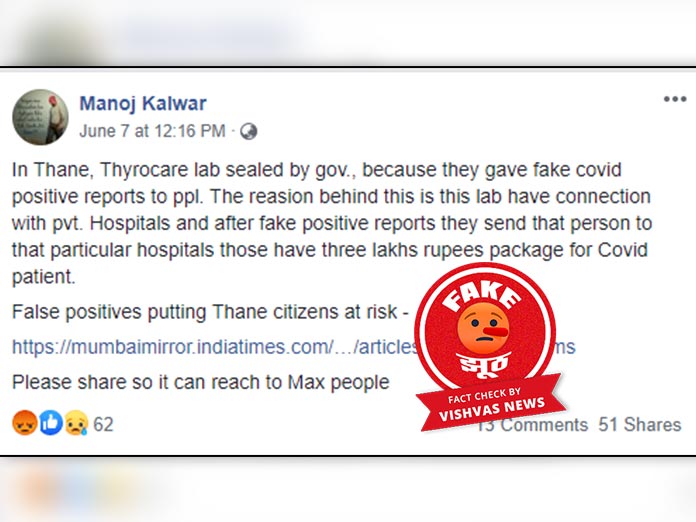 New Delhi (Vishvas News): A post doing rounds on social media claims that Thyrocare lab has been sealed by the government for diagnosing fake COVID positive (a test result improperly indicating the presence of a condition when in reality it is not present) reports to people. Vishvas News investigated and found that though Thane Municipal Corporation has asked Thyrocare to halt COVID-19 testing in Thane, the post claiming that Thyrocare labs in Thane have been sealed is nothing but fake news.

The viral message of Facebook reads: “In Thane, Thyrocare lab sealed by gov., because they gave fake covid positive reports to ppl. The reason behind this is this lab have connection with pvt. Hospitals and after fake positive reports they send that person to that particular hospitals those have three lakhs rupees package for Covid patient. False positives putting Thane citizens at risk. Please share so it can reach to Max people.” The message also shares the link of an article in Mumbaimirror. The archived version of the post can be checked here.

A false positive is an error in data reporting in which a test result improperly indicates presence of a condition when in reality it is not present.

None of these reports claimed that Thyrocare labs were sealed by the government. As per the report, the Thane Municipal Corporation has asked Thyrocare labs to stop testing coronavirus swab samples of suspect patients after the civic body allegedly found irregularities in the test results from the private lab.

We investigated and found that while Thane Municipal Corporation has asked Thyrocare to stop testing, they have not ordered to seal any Thyrocare lab in Thane.

The viral message also does not mention the location or details of the sealed lab in Thane.

We also found a tweet by Mumbai Mirror that read: #FakeNewsAlert: #ThyrocareLab has not been sealed. If you’ve received any such forward along with this news report from May 22, please read the full story, it makes no such claim.

Vishvas News spoke to Sachin Salvi, Vice-President (Finance), Thyrocare who denied the allegations that Thyrocare lab in Thane has been sealed. He also shared a mail with us writing: “Thyrocare Technologies Limited refutes all the allegations referred in the said fake news. The news/ fake news seems to have relied only on certain information and appears to have been made in a hurry pointing to only a certain quote in a selective manner and does not cover our denial of adverse claims against us.”

Salvi denied the allegations that the lab had a nexus with a private hospital and said the company is waiting for a response from the civic body. He also added: “We have written to the corporation justifying the tests but have not received any responses.”

We also found a tweet from Thyrocare that read: “!! Fake News Alert !! Rumours being spread that Thyrocare is sealed. We reported 1,881 COVID samples on 6.6.2020. Cybercrime alerted, FIR filed for this nefarious activity under Epidemics Diseases Act. We continue to focus on delivering affordable & quality services to public.

The viral message is shared on Facebook by a user named Manoj Kalwar. We scanned the social profile of the user and found that he is based out of Mumbai, Maharastra.

Conclusion: No, this lab in Thane has not been sealed as claimed in the viral post.. TMC has not sealed the lab, it has issued the notice seeking clarification on the irregularities in the reports.