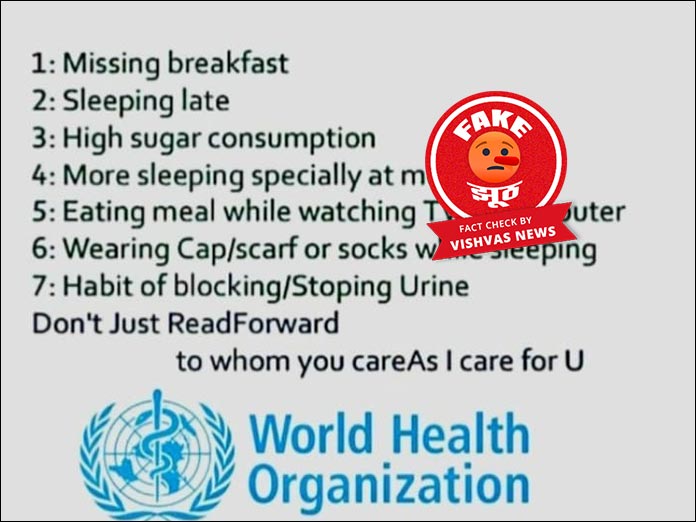 An image going viral on social media claims that World Health Organization (WHO) has laid down 7 biggest brain damaging habits. These include missing breakfast, sleeping late, high sugar consumption, more sleeping especially in the morning, eating meals while watching TV or computer, wearing a cap/scarf or socks while sleeping, the habit of blocking/stopping urine.

Vishvas News earlier investigated by breaking the claims of the viral post one by one. While conducting the preliminary check we found that the viral claim is filled with grammatical and syntax errors.

If this has been released by the World Health Organization, there wouldn’t have been so many errors.

Upon contacting the WHO spokesperson this got confirmed that the viral post has not been shared by WHO and has been falsely attributed to the organization.

The post is shared on Facebook by a user named Arvind Bhullha. We scanned the profile of the user and found the user is based out of Bangalore.

Conclusion: The post claiming WHO issued 7 brain damaging habits is falsely attributed to the organization. While the seven habits mentioned in the viral post do not directly lead to brain damage, however, it can cause serious health complications when done in excess.