Post claiming treatment of all deadly poisons on call is fake. The post was debunked in June 2019 and has resurfaced now. 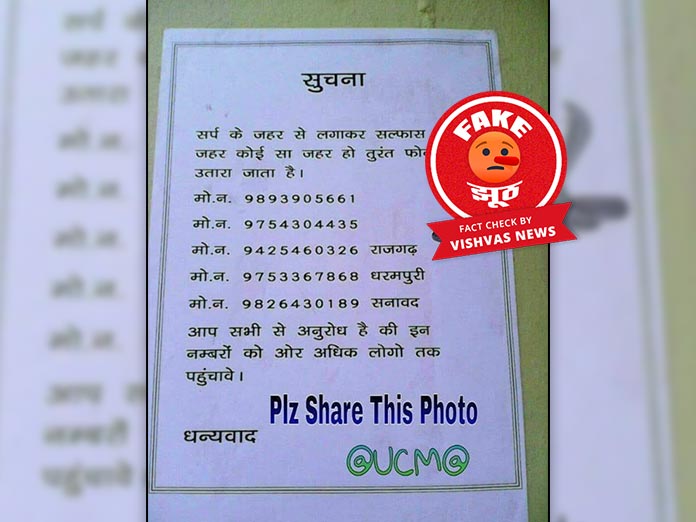 New Delhi (Vishvas News): A post has resurfaced on social media claiming that any type of poison (from snake poison to celphos poison) can be treated on call immediately. Vishvas News investigated and found that the viral claim is false.

Vishvas News called up the numbers given in the post. One of the numbers which got connected was received by someone who said that he cures poison by chanting a mantra on the phone. When we inquired further he disconnected the call and switched off his phone.

We also searched online whether all types’ of poisons can be cured by chanting a mantra. The researches and detailed fact check can be read here.

We further investigated by contacting National Poison Informatics Centers of AIIMS. Dr Swati Sharma of AIIMS stated that: “There is a proper treatment for poison. Doctors contact the people for treatments and they provide suggestions. The treatments need to be followed properly. One cannot treat any deadly poison just by saying something to the patient on call.“

The post has been shared on Facebook by a user named Dipu Pagare Dipu Pagare. We scanned the social profile of the user and found that the user is based out of Khandwa.

Conclusion: Post claiming treatment of all deadly poisons on call is fake. The post was debunked in June 2019 and has resurfaced now.