Vishvas News found that the viral tweet in the name of Amit Shah is fake. He did not tweet in the support of the SP alliance for the assembly elections. The fake tweet was created by tampering with Shah’s original tweet. 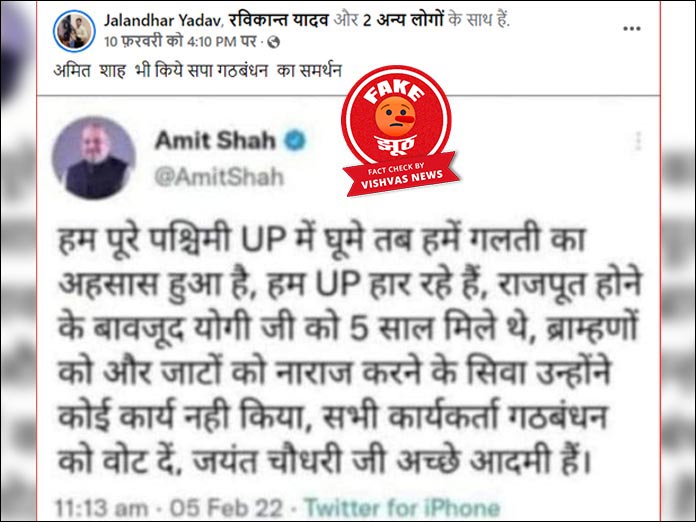 New Delhi (Vishvas News). Amid the ongoing assembly elections in five states of the country, including UP, the flow of fake news on various social media platforms has increased. Now a fake tweet of Union Home Minister and BJP veteran Amit Shah is going viral. In this, using the picture of Amit Shah, it is being claimed that Amit Shah has spoken of supporting the SP alliance. Vishvas News investigated the viral tweet in detail. It turned out to be fake. No such tweet has been made by Amit Shah.

The content of the Facebook post is as it is written here. Its archived version can be seen here. Many other users of different social media platforms have also shared this post with the same claim.

Vishvas News first started scanning the social media handle of Union Home Minister Amit Shah to know the truth behind the viral fake tweet. For this, we used the Twitter search tool present in InVID. On his official Twitter handle, we found a tweet in English on February 5 at 11:13 AM. In this, he paid tribute to the death of BJP veteran C Janga Reddy. It can be viewed here.

Vishvas News contacted Avneesh Tyagi, the UP State Spokesperson of the Bharatiya Janata Party, taking the investigation further. We shared the viral post with him on WhatsApp. He told that it is fake. No such tweet was made by Amit Shah.

At the end of the investigation, Vishvas News did a social scanning of Facebook user Jalandhar Yadav, who had made the fake post. It was found that the user has about five thousand friends. The user is a resident of Kanpur, UP.

Conclusion: Vishvas News found that the viral tweet in the name of Amit Shah is fake. He did not tweet in the support of the SP alliance for the assembly elections. The fake tweet was created by tampering with Shah’s original tweet.