Fact Check: BBC News did not publish this about Left Rally in West Bengal, viral claim is fake

The viral post is fake. BBC did not make any news coverage on Kolkata rally. 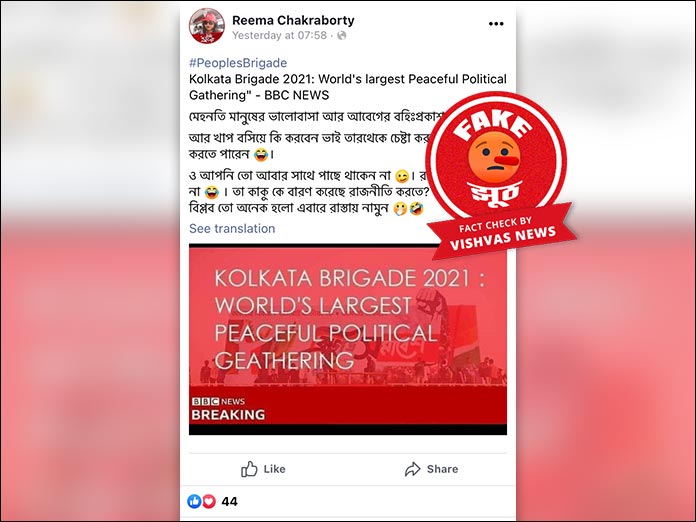 Vishvas News investigation revealed the claim is fake. BBC media personnel refuted the claims on their news coverage on the rally stating they have no published any such reports.

A viral graphic card attributed to the BBC News claims the West Bengal’s Left rally at Brigade ground, Kolkata as the World’s largest peaceful political gathering. The archived version of the post can be seen here.

Wanting to display their strength, the CPI(M) held a mega-show along with its allies in the Left on Sunday. The rally was at Kolkata’s Brigade Parade Ground, which is the largest open ground in the city. The mega-rally comes just prior to the West Bengal assembly polls, stated a news report by the Times Of India.

While Vishvas News recently debunked a viral post in connection with the Kolkata rally, we searched on the internet for BBC news reports for verification.

We did not find news reports about the rally on their website.

Vishvas News contacted BBC Media Centre, Global News Limited and World Service Group via email for verification. Tess Colley, BBC publicist said, “ I can confirm the BBC has not published any such story.”

Social scanning of the user who shared the viral post revealed that she is from West Bengal and is active on Facebook since March 2011.

Conclusion: The viral post is fake. BBC did not make any news coverage on Kolkata rally.