Vishvas News in its investigation found that the viral video is edited. 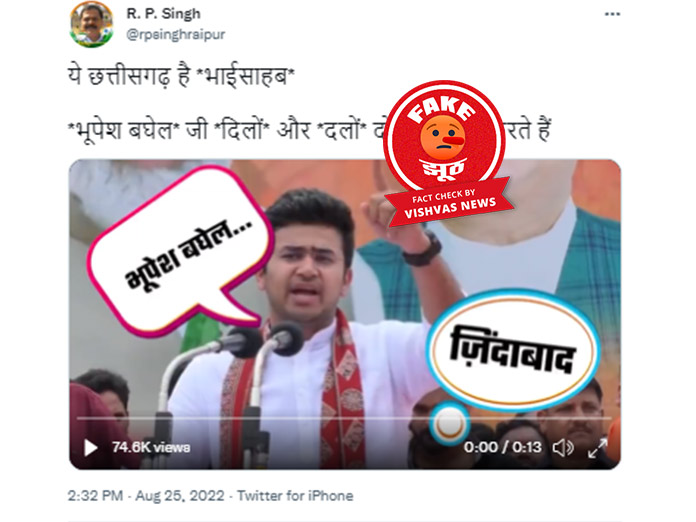 New Delhi (Vishvas News). A 13-second video is going viral on social media. In this, BJP MP and Bharatiya Janata Yuva Morcha President Tejashwi Surya can be seen addressing a rally. It is being claimed in the video that as soon as Tejashwi Surya took the name of Bhupesh Baghel during the rally, the people present there started raising slogans of Zindabad. Vishvas News in its investigation found that the viral video is edited.

Tejashwi Surya, BJP MP and President of Bharatiya Janata Yuva Morcha, addressed a public meeting in Raipur on August 24 for the next year’s assembly elections in Chhattisgarh. The keyframes of the viral clip are very similar to those of the public meeting. We found the full video of this rally on Tejasvi Surya’s verified Facebook account. The viral clip can be seen in this video at 2 minutes 15 seconds. But here the slogans of Zindabad are not raised when Tejashwi Surya says Bhupesh Baghel. After listening to the video, we know that he had said, “Bhupesh Baghel is not the chief minister, he is the collection master of Sonia Gandhi.” After this, slogans of Zindabad are raised at 2 minutes 28 seconds. Clearly, after 2 min 15 sec the video is clipped and directly lands on 2 min 28 sec, giving the illusion that the slogans were for Bhupesh Baghel, while the slogans were actually for Tejasvi Surya.

We talked to Sandeep Kumar Tiwari, a journalist from Chhattisgarh’s Naidunia, about this. He also confirmed that the video is edited and that the slogans of ‘Bhupesh Baghel Zindabad’ were not raised during Tejashwi Surya’s speech.

We also spoke to BJYM state president Amit Sahu in this regard. “This is an edited video, no slogans of ‘Bhupesh Baghel Zindabad’ were raised anywhere during the programme,” he said.

We scanned the profile of Facebook user Lalitapintu Binkar, who posted the edited video. He is a resident of Chhattisgarh.

Conclusion: Vishvas News in its investigation found that the viral video is edited.