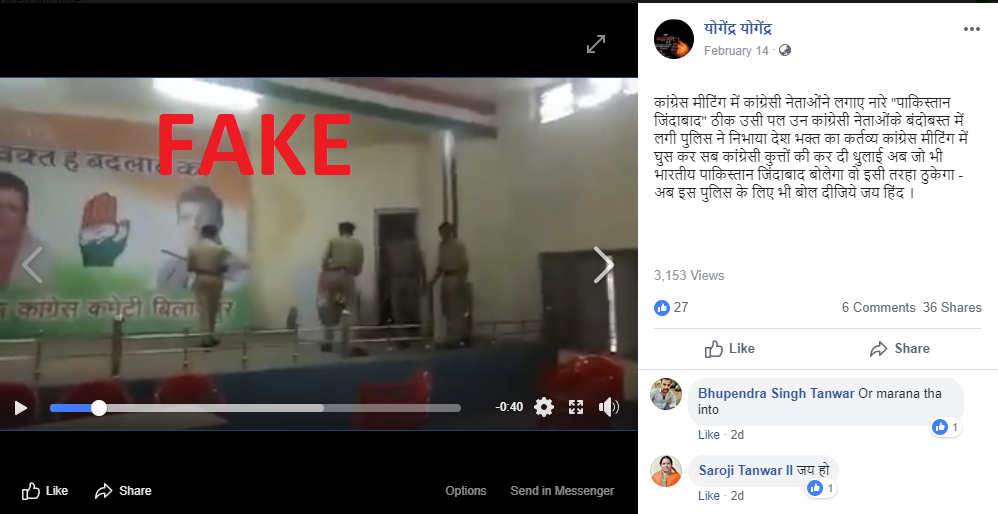 The video has been posted in the wrong context. The description written with this video is incorrect. There is no evidence that the Congress workers chanted ‘Pakistan Zindabad’.

In this video, Bilaspur can be clearly seen written on the banner. On this basis we started our fact checking process. We did Google search with the keyword – ‘Bilaspur Police Lathicharge’. We found a news peice posted on September 19, 2018 describing the police entered the Bilaspur office of Chhattisgarh Congress unit and lathicharged the party workers for throwing garbage in the house of a legislator. This news was published on the news websites of Times Now and Dainik Bhaskar, and the same video was embedded in both stories.

Later, we talked to the Raipur Bureau Head of Jagaran.com to confirm the incident as mentioned in the news websites above. He informed us that on Sept 19 last year the Congress workers had reached the bungalow of the then city legislator and urban administration minister Amar Agarwal to protest and raise the issue of garbage in Bilaspur.  During the protests, some garbage were thrown at the premises of minister’s bungalow. After this incident, the police lathicharged the protesters. Soemof the party workers ran away from there to hide in the Congress headquarters building in the city. The police followed them and continued the baton-charging inside the party headquarter also. Later, the police officers had alleged that Congress workers misbehaved with the women police during the protests. The viral video was shot during the protests and police action in Bilaspur on Sept 19 last year.

Conclusions: In our investigation we found that the police lathicharged the Congress workers not because of saying Pakistan Zindabad, but because of throwing garbage at a MLA’s house. There is no evidence that these workers said Pakistan Zindabad. This post is old and completely wrong.