Vishvas News checked the viral Times Magazine picture of PM Modi and found the claim being made about the picture is false. The original picture features Putin’s face and was created not by the magazine at the time, but by graphic designer Patrick Mulder. 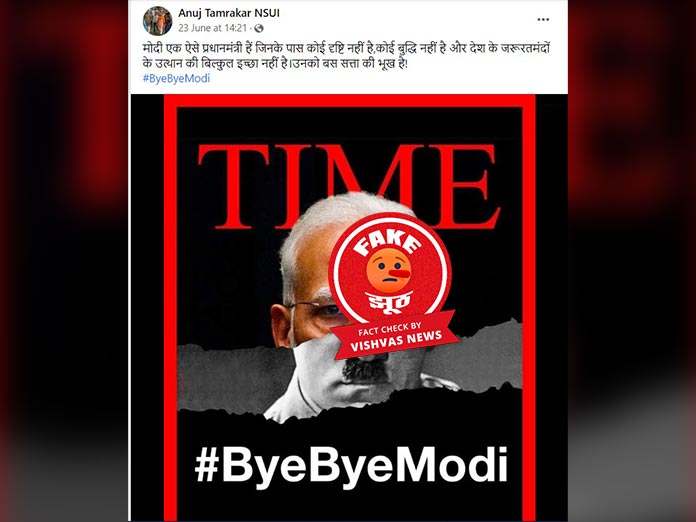 Vishwas News (New Delhi): A purported picture of the cover page of ‘Time’ magazine is being shared with the claim that PM Narendra Modi has been compared to Hitler by Time magazine. Vishvas News checked the viral picture and found that the photo was edited. The original image features Putin’s face and was not created by Time magazine, but by graphic designer Patrick Mulder.

Facebook user Pooja Achariya has (Archived Version) shared the viral picture. It is written on the picture in Hindi, “Modi is such a Prime Minister who has no vision, no intellect and absolutely no desire to uplift the needy of the country. He is just hungry for power!” #ByeByeModi

We Search the viral picture through Google reverse image. We found similar artwork of Vladimir Putin with a Hitler moustache on a Twitter account named Patrick Mulder. In the original picture, not PM Modi, but Putin’s face is attached. On February 28, 2022, Patrick Mulder shared his artwork and wrote, “This is an artwork made by me. I made this picture of Putin on the day Russia invaded Ukraine. I built it to protest Russia’s invasion of Ukraine.”

We contacted Patrick Mulder for confirmation. He told us, “The viral claim is false. The original picture has Putin’s face. This photo was not published by Times Magazine. I made this picture. I am a graphic designer. I didn’t intend to make the artwork as a Time cover. I wanted to create something that revolved around the invasion of Ukraine and conveyed the mood of the public.” The difference between the two pictures can be seen below.

Vishvas News, in the last phase of the investigation, conducted a background check on the profile that shared the viral post. We found that the user has 23,432 followers on Facebook. Pooja Achariya has been active on Facebook since May 2016.

Conclusion: Vishvas News checked the viral Times Magazine picture of PM Modi and found the claim being made about the picture is false. The original picture features Putin’s face and was created not by the magazine at the time, but by graphic designer Patrick Mulder.