Fact Check: Dimple Yadav did not make this statement about the possibility of Yogi becoming UP CM again; edited breaking plate viral

We found in our investigation that Dimple Yadav did not make this statement about ‘Yogi becoming the CM of UP again.’ The breaking plate that is going viral with this claim is edited. 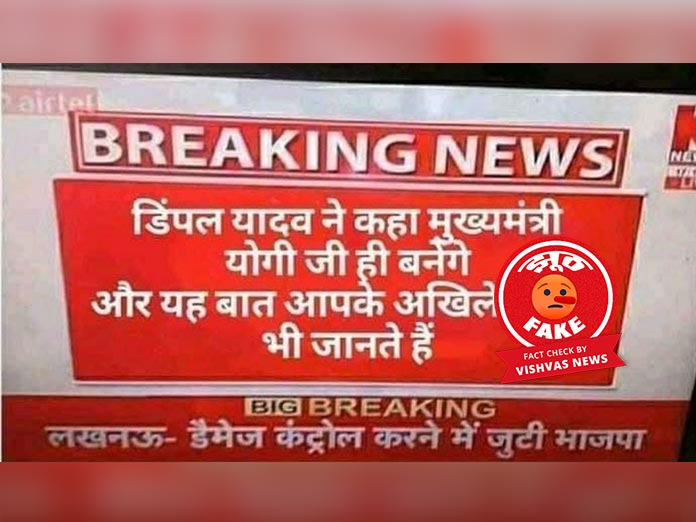 New Delhi (Vishvas News). A picture of a breaking plate of a Hindi news channel is going viral on social media where it is being claimed that Dimple Yadav, wife of former Uttar Pradesh Chief Minister Akhilesh Yadav, has said that Yogi Adityanath will become UP Chief Minister again.

In the investigation of Vishvas News, this claim proved to be fake propaganda. The breaking plate going viral is edited.

What is in the Viral claim?

Facebook user ‘Rockboy Ajay Shukla‘ shared the picture of a breaking plate of a Hindi news channel. The breaking plate reads: “Translated: Dimple Yadav has claimed that Yogi will be the next Chief Minister of Uttar Pradesh.”

Several other users on social media have also shared the post.

It is unusual for the leader of an opposition party to make such a statement, hence prima facie it looks to be fake. We did a keyword search but could not find any such news on any authentic media house. In fact, in the news search, we could not find any recent news related to Dimple Yadav.

We contacted the editor-in-chief of K News, Durgendra Chauhan, regarding this breaking plate. Terming the viral picture as fake, he said, “No such news has been run on our channel and the breaking plate that is going viral is edited.”

On the social media handle of K News, we found pictures of many breaking plates of the channel, from which it can be clearly inferred that the viral plate is edited and fake. This difference can be clearly seen in the collage below.

A while ago, a video of Akhilesh Yadav had gone viral on social media, with the claim that he had claimed that the Yogi government would be formed again in the state for the prosperity of Uttar Pradesh. We found that claim to be false in our investigation. The related fact check report can be read here.

The user who shared the viral and fake breaking plate with the wrong claim is a resident of Sitapur in Uttar Pradesh according to his profile info. Most of the political posts are shared from this profile.

Conclusion: We found in our investigation that Dimple Yadav did not make this statement about ‘Yogi becoming the CM of UP again.’ The breaking plate that is going viral with this claim is edited.