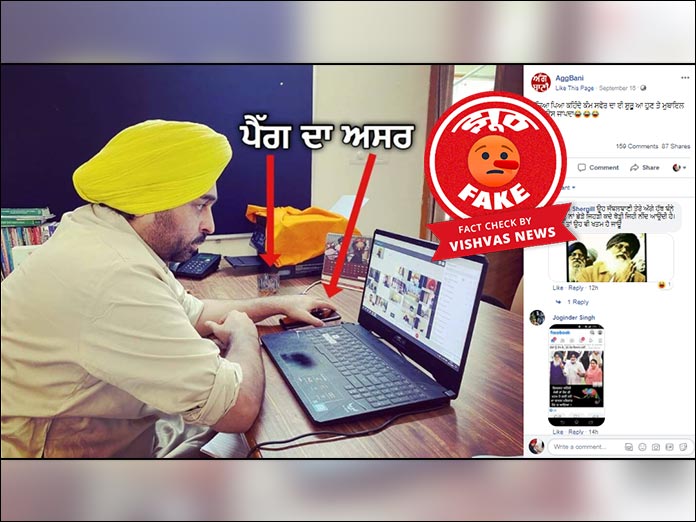 New Delhi (Vishvas News). A picture of Aam Aadmi Party MP Bhagwant Mann in Punjab is viral on social media where a liquor glass can be seen near his hand.

Vishvas News investigation revealed that Mann’s original picture was tampered and edited with a liquor glass near his hand. The viral post is fake.

The Facebook page “AggBani”, uploading this edited picture on 16 September wrote, “The work has started in the morning and the mobile seems to be a mouse.”
The archived version of the post can be seen here.

We started the investigation with Google reverse image search. We found the original photo in a post uploaded from the official Facebook profile of Bhagwant Mann. The picture uploaded on 16 September has no glass anywhere in it. The Facebook post can be seen below.

On comparing the viral picture with the original, we could confirm that the photo used in the viral post is edited.

We contacted Aam Aadmi Party Punjab spokesperson Garry Wadding to verify this picture. Wadding clarified to us that the image has been edited.

Similarly, a few days ago another fake post with Bhagwant Mann’s picture went viral with a claim that he is drinking alcohol. The fact check article can read here.

Social scanning of the Facebook page “AggBani” sharing this fake post, revealed that it was created in November 2013 and has 2,49,477 followers.

Conclusion: The viral picture of Bhagwant Mann is edited with liquor glass.