Fact check: Government of India is not conducting any election survey 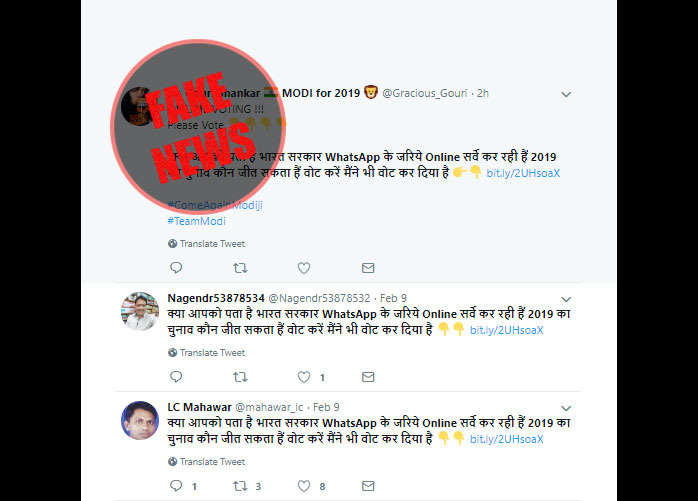 New Delhi (Team Vishvas) One of our readers has sent us a message on whatsapp for fact check that reads – ““क्या आपको पता है भारत सरकार WhatsApp के जरिये Online सर्वे कर रही हैं 2019 का चुनाव कौन जीत सकता हैं वोट करें मैंने भी वोट कर दिया है 👉👇 https://bit.ly/2UHsoaX.’(English: Do you know the government of India is conducting an election survey via whatsapp. Please vote. I have already given my vote 👉👇 https://bit.ly/2UHsoaX). In our fact-check investigation, we found that the government of India is not conducting any such Online survey. This message is false.

We got this message on our Whatsapp number which the Vishvas.News has shared on the website for the users to send us any viral news for fact check. Once we received the the message, we found that te same message is viral on Twitter and Facebook also.

The message implies that ‘Government of India’ is conducting this survey hence we decided to investigate the truth behind the message. We clicked on the link given and it opened in a poll page opening with the URL – http: //hostindian.in/Pmindia2019/#.

As we know that all government websites open on a secure platform. The poll page website URL was opening with http://, and not with https:// in which ‘s’ stands for ‘secure’. We decidec to vote in the survey on the poll page. When we finished with the survey, a pop-up asked us to forward this message to 10 more people in our friend list. Also, it asked us to download an app.

When we clicked to download the app, it asked us to install 4 Fun – Funny Video, WhatsApp Status App.

The page has a banner beneath the picture of politicians, which says #DailyhuntTrustoftheNation. We searched this hashtag and found that this hashtag was used during a survey conducted by news app Daily Hunt.

We sent a mail to Daily Hunt asking about any survey it’s conducting. A representative of Daily Hunt told us that they had done a survey – #TrustOfTheNation – in the months of October and November in 2018. This survey was done in partnership with Nielsen India. They told us that this survey was done only on the Daily Hunt app and One India website, and not through any message or other website. Also, we were told that this survey URL has now been deactivated.

Later, we called the Central Information Commission (CIC) for official confirmation and we were told by the Joint Secretary staff that the government of INdia is not conducting any such survey.

Conclusion: In our investigation we found that the government of India is not conducting any such survey as claimed in the WhatsApp message our user had received. We also found that the graphics used in the message are also taken from a News App Daily Hunt’s old political survey. This message is clichbait, do not click on this URL, nor forward it.