Fact Check: JEE 2020 Exam not cancelled at some centers in Lucknow, the viral claim is fake 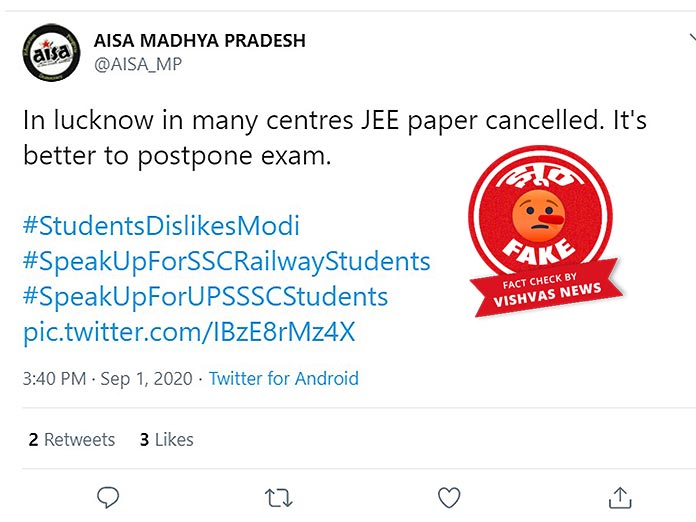 The National Testing Agency (NTA) is the in-charge authority in conducting these exams. We did not get any notice of the cancellation of the exam at their website.

The National Testing Agency has clarified the claims to be fake in their tweet.  Exams were not to be held at Krishna Nagar and Jankipuram Extension of Lucknow. The exams were conducted at other centers in Lucknow.

Vishwas News spoke to Dainik Jagran’s Lucknow correspondent Pulak Tripathi to verify the claim. He said that on Tuesday (September 1, 2020), there was JEE main exam for Bachelor of Architecture. “There were fewer participants for this course. For this reason, this examination was conducted at only three centers out of nine. He said that the rumor of cancellation of the examination might have arised due to less number of centers. The viral claim is fake,” said Tripathi.

In social scanning of the Twitter user ‘Aisa Madhya Pradesh’, we came to know that the user is from Madhya Pradesh and the account is active on Twitter since July 2020.

Conclusion: JEE 2020 exams were not cancelled at some centers in Lucknow.