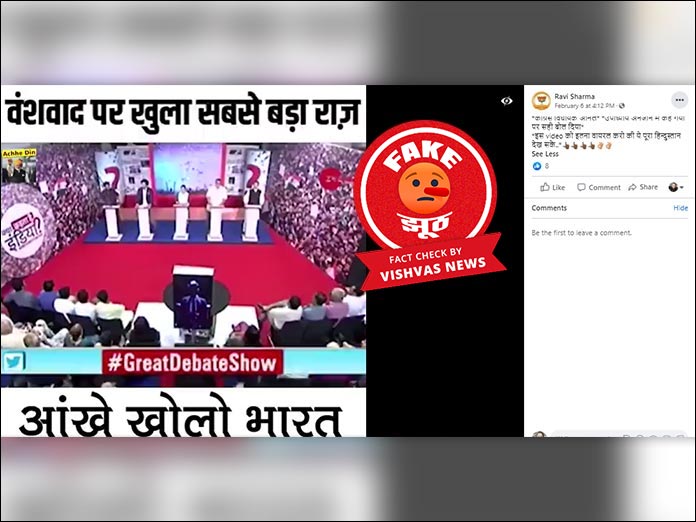 New Delhi (Vishvas News): A viral post on social media claims that the person seen in the video is Congress MLA, Anil Upadhyay. In the video, a person can be heard speaking against the Congress party.

Vishvas News investigated the viral post and found that the person seen in the video is not a Congress MLA but Bollywood director Vivek Agnihotri. There have been several posts that have circulated in the name of MLA Anil Upadhyay and Vishvas News had debunked them.

Facebook user Ravi Sharma, while uploading a video on 6 February 2021, claimed: “Congress MLA Anil Upadhyay inadvertently said it but said it right, make this video so viral that the whole of India can see.. “

Vishvas News carefully observed the video and saw the logo of Zee News on it. A breaking plate of #GreatDebatesShow can be seen in the video.

Vishvas News used the InVid tool to extract the screengrabs of the video and performed Google Reverse Image Search of the video using the keywords ‘zee news + # GreatDebatesShow’. We found a panel discussion uploaded on Zee News’s verified YouTube channel on October 21, 2017. The description of the video stated: “The Great Debate Show: Is nepotism damaging democracy in India?” After watching the entire video, the name of Vivek Agnihotri can be seen written on the breaking plate along with the speaker.

On searching, we found that Vivek Agnihotri is a filmmaker, not a politician associated with any party. Below you can see the comparative analysis of pictures of the filmmaker Vivek Agnihotri and the person seen in the viral video.

For confirmation on this post, we contacted our correspondent Smita Srivastava covering Bollywood Dainik Jagran. She said, “The person appearing in the video is Bollywood’s famous filmmaker Vivek Ranjan Agnihotri.”

We did the social scanning of Facebook user Ravi Sharma, who shared the video viral with a fake claim. We found that the user is based out of Dubai and has 810 friends on Facebook.

Conclusion: Vishvas News investigated the viral post and found that the person seen in the video is not a Congress MLA but Bollywood director Vivek Agnihotri.