Fact Check: No, Kanhaiya Kumar doesn’t have assets worth 18 crores 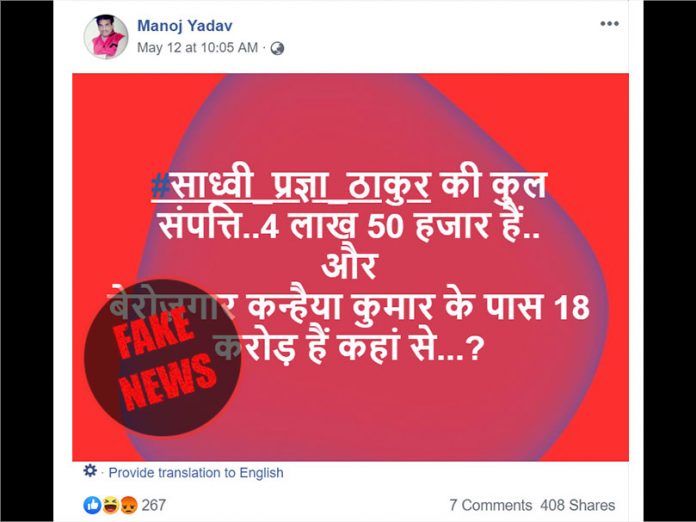 Lok Sabha elections have ended in the nation but fake posts related to the candidates in the social media are still rolling out. A similar post has got viral recently of CPI candidate Kanhaiya Kumar. It has been claimed in the viral post that the unemployed Kanhaiya Kumar has assets worth Rs 18 crore. Vishvas News team investigated and found that the post is fake.

The report was related to Kanhaiya Kumar’s assets. We then visited the website of Association for Democratic Reforms and myneta.info and searched for the information related to Sadhvi Pragya Thakur and Kanhaiya Kumar.

Then we began the search of the information related to Pragya Thakur. In her affidavit, property worth Rs 4.44 Lakh has been mentioned.

In a news report shared on the website of naidunia.jagran.com, it has been stated that the source of income of Sadhvi Pragya is dependent on begging and society.

We did the social scanning of the profile of the Facebook user Manoj Yadav, who posted the fake link associated with Kanhaiya Kumar and found the user has 28000 followers. Vishvas team used the Stalkscan tool for scanning Manoj Yadav’s Facebook profile.

Article was originally written in Hindi by Ashish Maharishi.