In our investigation, it was found that the photograph of Sonia Gandhi, PM Modi and Lok Sabha Speaker Om Birla has been shared with a misleading claim. The picture, taken during an all-party meeting in August 2021, is being shared in the name of a secret meeting between the BJP and Congress. 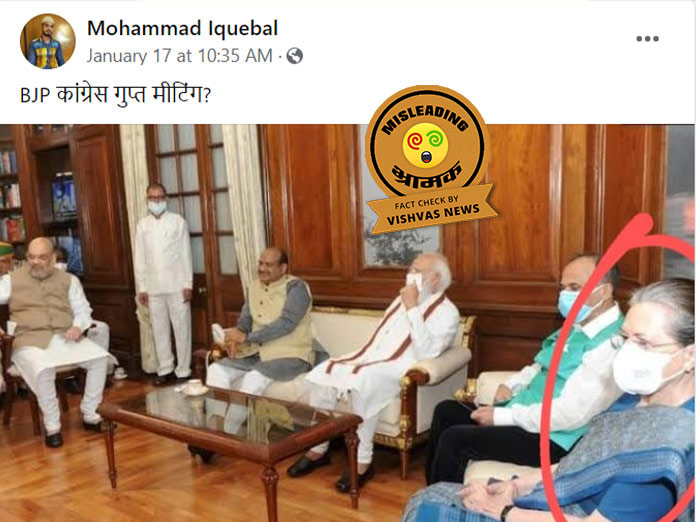 A picture of Sonia Gandhi, Adhir Ranjan Chowdhary, PM Modi, Lok Sabha speaker Om Birla and Amit Shah is going viral on the internet with a claim that this picture has been taken during a secret meeting between the leaders of Congress and the BJP. Vishvas News fact-checked the viral post and found that the picture was clicked in August 2021 during the meeting of Lok Sabha Speaker Om Birla with Sonia Gandhi, PM Modi and other leaders from across political parties. Hence the claim of a secret meeting between the BJP and Congress turned out to be misleading.

Vishvas News first used the Google reverse image tool to verify the authenticity of the viral picture. After uploading the picture to Google’s reverse image tool, many pictures related to it were found on other websites. An article published on August 12, 2021, in Financial Express.com stated that on August 11, 2021 PM Modi, Amit Shah, Sonia Gandhi and other leaders held a meeting with Lok Sabha Speaker Om Birla. Bhaskar.com also used a picture of the same meeting as a file photo in one of its reports.

Taking the investigation forward, we scanned the Twitter handle of Lok Sabha Speaker Om Birla. A video uploaded on August 11, 2021, was found on his handle with the caption, “After the proceedings of the Lok Sabha were postponed indefinitely, the leaders of all parties were urged to encourage discussion and dialogue in the House in future for the welfare of the public and to remove their shortcomings.”

Talking to Vishvas News, National Co-ordinator of Social Media and Digital Communication of Congress, Nitin Agarwal said, “The viral picture is taken after the end of the Lok Sabha session in August 2021. IT Cell and their fake handles are habitual in spreading fake news”.

We also investigated the Facebook account of the user who shared the old picture with the misleading claim. The Facebook user Mohammad Iqbal is followed by more than 7,000 people and hails from Dubai. This account was created in March 2014.

Conclusion: In our investigation, it was found that the photograph of Sonia Gandhi, PM Modi and Lok Sabha Speaker Om Birla has been shared with a misleading claim. The picture, taken during an all-party meeting in August 2021, is being shared in the name of a secret meeting between the BJP and Congress.