Fact Check: Old video of attack on Priest In Fatehabad viral with fake claim as from Gujarat 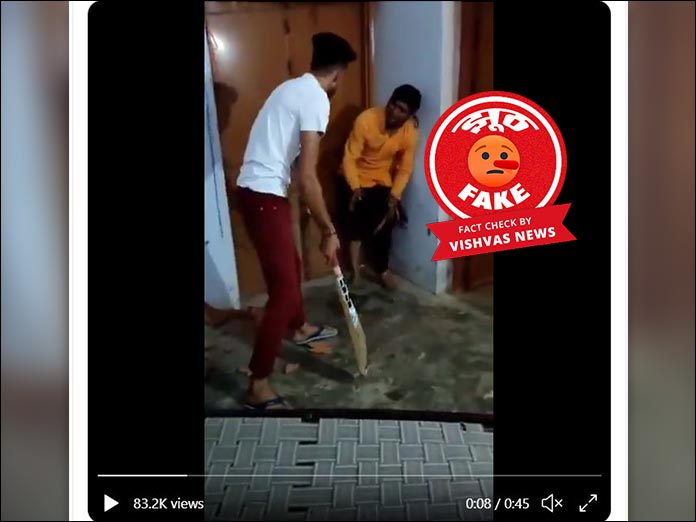 New Delhi (Vishvas News). A video of a man attacking another man with cricket bat is viral on social media with a claim that he is thrashing the priest for molesting a girl at a temple in Gujarat.

Vishvas News investigation revealed the claim is fake. The video of the incident in Fatehabad district of Haryana is viral as from a temple in Gujarat.

Many other users have shared this video with similar on different social media platforms.

In the social media search, we found a tweet posted by West Bengal Police from their official twitter handle alerting about the incident. The tweet has alerted people that the viral video from Harayana is circulated as from West Bengal.

The same tweet also mentions a news report published in Dainik Bhaskar that clarifies about the incident. “In Fatehabad, Haryana, the police arrested four youths for assaulting a priest. Three days ago, they had beaten the priest with a cricket bat as he did not allow them to keep the bat inside the temple,” stated the report. The Bhattu Kalan police registered a case of assault and have arrested the four men.

We also found Dainik Jagran’s news report published on 3 November. According to the report, “The video of assault on a priest living in a temple in Dhabikalan village of Fatehabad went viral on social media… Kailash Sharma, a resident of village Biro in Chhatarpur district of Madhya Pradesh, worked as a priest in the temple. On Monday, some youths attacked the priest with a cricket bat and severely injured him.”

The Fatehabad police has informed about the arrest of the four accused in a tweet from their official Twitter handle.

Vishvas News contacted Bheem Singh, PRO of Fatehabad police to verify the claim. Confirming the incident to be from Fatehabad, he said, “The youths accused in this case have been arrested and the matter is under investigation.”

More than five thousand people follow the page that shared the viral post. This page is active since July.

Conclusion: The viral claim is fake. This viral video is from Fatehabad, Haryana. Four men have been arrested for attacking the priest.