Vishvas team investigated this viral claim and found that the viral claim is false. The video is almost 5 years old when Ravi Kishan jokingly told his supporter that his sweat smells very bad. 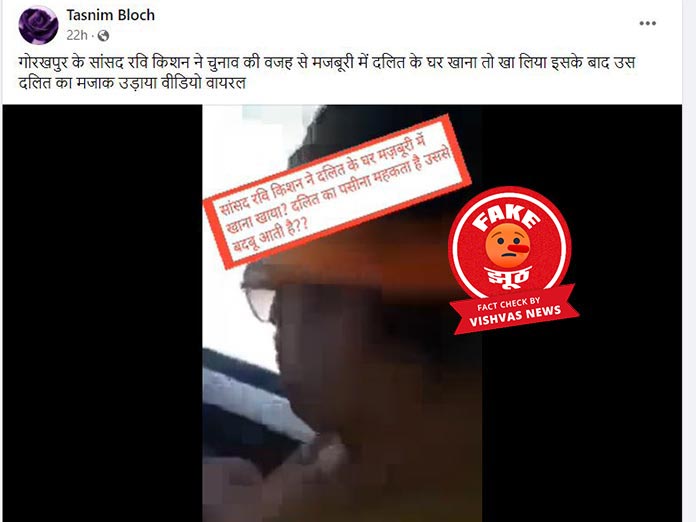 New Delhi (Vishvas News). Bharatiya Janata Party’s Gorakhpur MP Ravi Kishan recently dined at a Dalit family’s house. Linking to this, an old video of him is going viral on social media these days. In this video, Ravi Kishan is seen saying, “Your sweat smells like this, what to say?” Sharing this video, it is being claimed that Ravi Kishan has compulsively eaten food in a Dalit’s house. And this is how he reacted afterward.

Vishvas News investigated the viral post and found it misleading. We found that the video is from 2017 and he said this in a personal conversation with his supporters. He did not make this comment about any religion, caste. An attempt is being made to give a casteist color by sharing this video.

Sharing the viral video, Facebook user Tasnim Bloch claimed: ‘Gorakhpur MP Ravi Kishan compulsively ate food at a Dalit’s house due to elections, after which he made fun of that Dalit.”

Several other users on social media have shared the video with similar claims. Its archived version can be seen here.

Vishvas News used the InVID tool and took several grabs of the viral video and searched these screengrabs on Google reverse image. During this, we got the viral video uploaded on a Facebook account named Bahujan Herald on 15 May 2020. Ravi Kishan was again targeted in this video but it was clear that the video is not recent.

Based on the information received, we searched on Google using various keywords. We got a report related to the viral video published on the website of Live Hindustan on 17 May 2020. According to the report, in the year 2020 also this video went very viral and people targeted Ravi Kishan. After which Ravi Kishan issued a clarification saying that this video is not of lockdown. This is from the time of the 2017 elections in Uttar Pradesh and he had said all these things in an informal conversation with his supporters. Which some people are deliberately sharing wrongly to tarnish his image. Read full news here.

For more information, we contacted Rajesh Rai, senior journalist of Gorakhpur Dainik Jagran. We shared the viral video with him. He told us that the viral claim is false.

Vishvas News also contacted Ravi Kishan’s Public Relations Officer Pawan Dubey. He told us “the viral claim is false. He has not commented on Dalits. This video is almost 5 years old, this video is from the year 2017. All the friends were in a car. Everyone was returning from an event. He had said this jokingly. He said all these things personally in a funny tone. When we all sit together, these kinds of jokes happen. Everyone does this, so did they. Which is now being shared by the opposition parties with the wrong claim.”

At the end of the investigation, we did a social scanning of Facebook user Tasnim Bloch who shared this post. The user is influenced by a particular ideology. User is active on Facebook since October 2016.

Conclusion: Vishvas team investigated this viral claim and found that the viral claim is false. The video is almost 5 years old when Ravi Kishan jokingly told his supporter that his sweat smells very bad.