Fact Check: Picture of half-burnt body of woman is not from Rajasthan, viral claim is fake 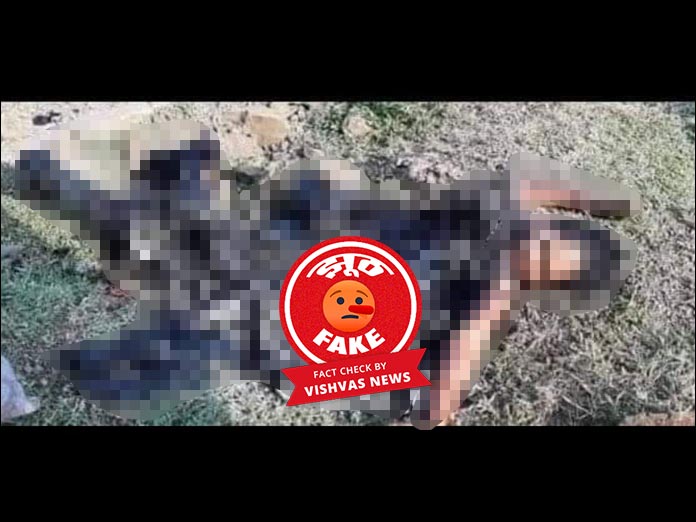 New Delhi (Vishvas News). A picture of half-burnt body of a woman is viral with a claim that a girl belonging to a particular community was raped and burnt alive in Tonk, Rajasthan.

Vishvas News investigation revealed the claim is fake.  The viral picture is of an incident in Dhar district of Madhya Pradesh.

Social media user ‘Ravindra Bhartiya’ shared the viral picture, writing, “This shocking picture is from Tonk district Niwai tehsil of Rajasthan, where 13-year-old Payal was burnt to life after being raped by Rizwan Ansari of the same tehsil. Rajasthan government and media are silent, why?”

We found this picture in Twitter user Rohit Patel’s tweet posted on 1 October during our search using Google reverse image search tool.  Patel has described it as an incident in Madhya Pradesh along with a newspaper clipping. We searched on the Internet for news reports. We accessed many such articles published along with the viral image clarifying the incident has been reported in Dhar district of Madhya Pradesh.

An article in the Dainik Bhaskar states, “The woman was murdered by her boyfriend along with her friend. The accused … burnt the corpse to erase evidence. Dhar Superintendent of Police Aditya Pratap Singh identified the two accused as Govind and Sohan. Sohan has been arrested while Govind is still absconding. The incident is of marriage dispute…”

The bulletin, uploaded on October 4 on YouTube channel MpChattisgarhaajtak has details of the incident.

Vishvas News spoke to Gandhwani police station in-charge Jayraj Solanki for latest information about the case. “This incident is from Gandhwani area of ​​Dhar district, where the woman’s half-burnt body was found. One of the two accused in the case is still absconding and a reward has been announced for information about him,” said Solanki.

Social scanning of the user  who shared the viral post revealed that he is from Lucknow.

Conclusion: The picture of the murder incident in Madhya Pradesh’s Dhar district is viral with communal claim as from Tonk town in Rajasthan.