The viral post is fake. News card has been edited and shared with fake claims. 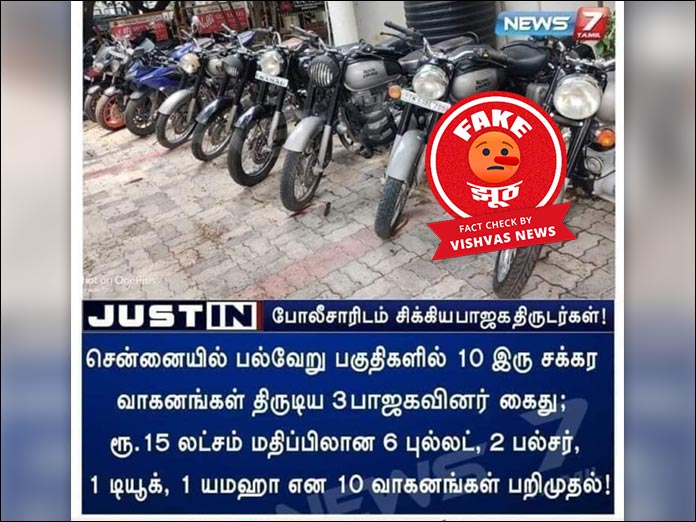 New Delhi (Vishvas News). A news card of a regional Tamil language News channel is viral on social media with a claim that police held three BJP members for involving in bike theft.

We could identify the original news card did not mention about BJP party members involved in the theft.

“The Nungambakkam police arrested three persons for allegedly stealing bikes at several places in the city. The police said the suspects, A. Mohammed Shafi, 27 of Mallipatinam, Thanjavur district; D. Sibi, 23, of Kerala; and Ameerjan, 36, of Virudhunagar district, were nabbed and 10 bikes estimated at ₹15 lakh were recovered from them,” stated an article in the Hindu.

Vishvas News contacted Niruban from News7 Web team for verification. “Someone has edited the news card. The post is fake,” he said.

As Tamil Nadu Assembly elections are to be held on April 6 and results on May 2, there are several fake posts shared on the Internet. Vishvas News has earlier debunked many such claims.

Social scanning of the user who shared the post revealed that he is from Thiruvarur district and is active on Facebook since October 2013.

Conclusion: The viral post is fake. News card has been edited and shared with fake claims.