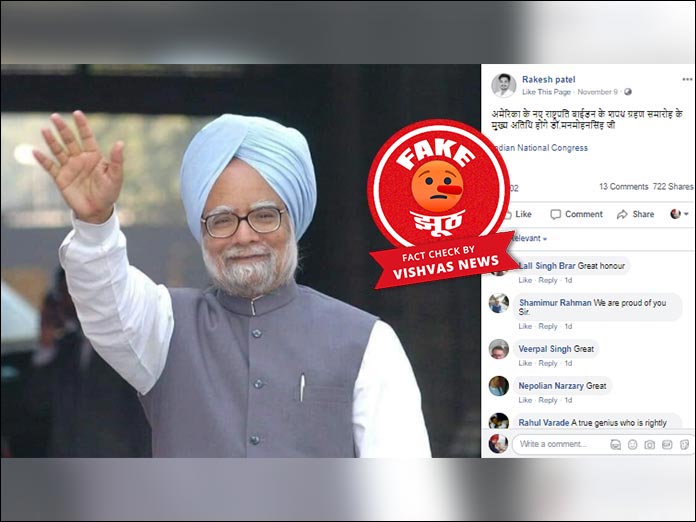 New Delhi (Vishvas News). A viral post on social media claims that Dr Manmohan Singh, former Prime Minister of India is the chief guest for the swearing-in ceremony of the new President of America, Joe Biden.

On November 9, Facebook page Rakesh patel uploaded a picture of former Prime Minister Dr. Manmohan Singh writing, “Dr Manmohan Singh ji will be the chief guest of the swearing-in ceremony of the new President of the United States.” The archived version of the post can be seen here.

Democrat candidate Joe Biden defeated Donald Trump in the United States Presidential Elections 2020 in a tough contest. Biden would be the oldest president in American history to have defeated Trump. The 77-yr-old former Vice President Biden will be the 46th President of the United States.

After Biden’s victory, Indian users are sharing a viral post claiming that India’s former Prime Minister Dr Manmohan Singh will attend Biden’s swearing-in ceremony. We searched on the Internet for news and did not find any authentic reports confirming the information. However, we accessed many reports that denied such claims.

We contacted Dr Manmohan Singh’s office to verify the claim. Denying the claims, the spokesperson in Singh’s office said, “We received many calls for the past few days regarding this viral claim. The viral claim is fake. Dr. Singh has not received any such invitation so far.”

Social scanning of the Facebook page that shared the viral claim revealed that it has 3,843 followers and is active since 21 April 2019. According to about information, the user is associated with a particular political party.

Conclusion: The viral post is fake. Former Prime Minister Dr Manmohan Singh’s office has denied such claims stating that they have received any invitation so far.