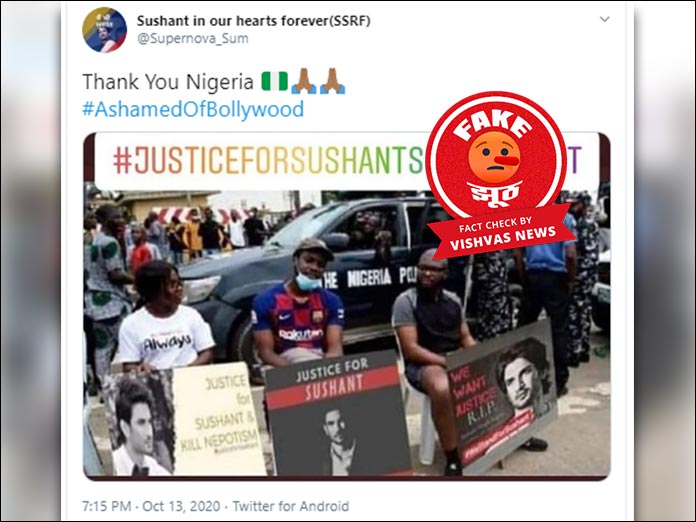 New Delhi (Vishvas News). A viral picture shows three men holding placards with images of late Bollywood actor Sushant Singh Rajput. The viral picture is shared with a claim that people in Nigeria are protesting to seek justice for Sushant.

Vishvas News investigation revealed the post is fake. People in Nigeria were protesting against a police force. Their placards did not have Sushant’s image. His picture has been digitally edited and pasted on the placards.

A picture of three protesters holding placards with images of late Bollywood actor Sushant Singh Rajput is viral on social media. The description of this post reads, “Thank You Nigeria #AshamedOfBollywood” and #justiceforsushant.”

We took a screenshot of this picture and searched it on the Internet using Google reverse image search. We found this picture in a news website thenationonlineng.net. The original picture used in this news published on 15 October did not have images of Sushant Singh Rajput in the placards. The article confirms that people in Nigeria were protesting to end SARS, a unit of the police force.

We also found this picture in cnn.com news published on 13 October. This picture also did not have Sushant’s images in the placards.

The article in the africa.businessinsider.com states, “Paystack, Cowrywise join brands in raising funds to support #EndSARS protests in Nigeria.”

We contacted Victor Oluvol, the editor who wrote this news for Business Insider Africa.  “The viral picture is edited.  People were protesting against the police force. There has been no news of any such protest in Nigeria for Indian actor Sushant,” said Oluvol.

Conclusion: The viral post is fake. Late Bollywood actor Sushant Singh Rajput’s image has been digitally edited and pasted on the placards of the protesters in Nigeria.