Fact Check: Posts claiming about ‘no vote no covid vaccine’ is misleading 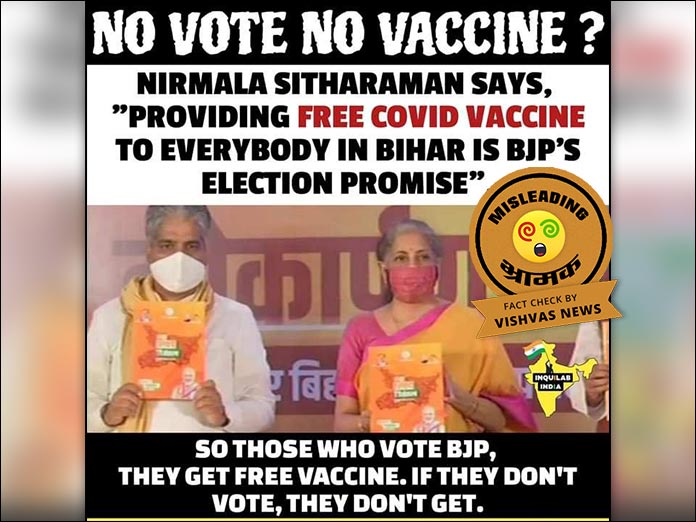 New Delhi (Vishvas News). With Finance Minister Nirmala Sitharaman announcing free covid vaccine as Bihar election manifesto, a viral post is shared with a claim that people who do not vote for the BJP will not get Covid vaccine free of cost.

Shortly after Finance Minister announced BJP’s election manifesto to provide free Covid vaccine for Bihar, a post shared on social media reads, “No vote no vaccine? … So those who vote BJP, they get free vaccine. If they don’t vote, they don’t get.”
The archived version of the post can be seen here.

We searched on the Internet for news about BJP’s Bihar election manifesto.

An article in the Dainik Jagran states, “Union Finance Minister Nirmala Sitharaman has made a big announcement today in Patna on 22 October, Thursday… Once the production of Covid vaccines starts on a large scale, it will be given free to all the people in Bihar. She made this announcement releasing the BJP’s manifesto in Patna ahead of Bihar Legislative Assembly elections.”

Sitharaman had taken a stand on the free Covid vaccine promise amid criticism by the opposition parties. “Opposition parties had demanded action from the Election Commission, alleging that the ruling party was using the epidemic for political gains. Senior BJP leader Sitharaman told reporters here, this is an announcement made in the manifesto. A party can declare what it wants to do when it comes to power,” states an article in the Dainik Jagran posted on 24 October.

Vishvas News contacted BJP spokesperson Tajinder Pal Singh Bagga to verify the claim. He clarified to us that voting has nothing to do with Covid vaccines. “Sitharaman Ji had announced that as the State BJP leader. However today, Union Minister had announced free Covid vaccine for all Indians,” said Bagga.

An article in the Jagran Josh had quoted Union Minister Pratap Sarangi announcing free Covid vaccine for all Indians.

Social scanning of the Facebook page Unoffical Kanhaiya Kumar revealed that it has 1,59,493 followers.

Conclusion: The viral post is misleading. BJP spokesperson clarified that Union Minister had announced free Covid vaccine for all Indians.