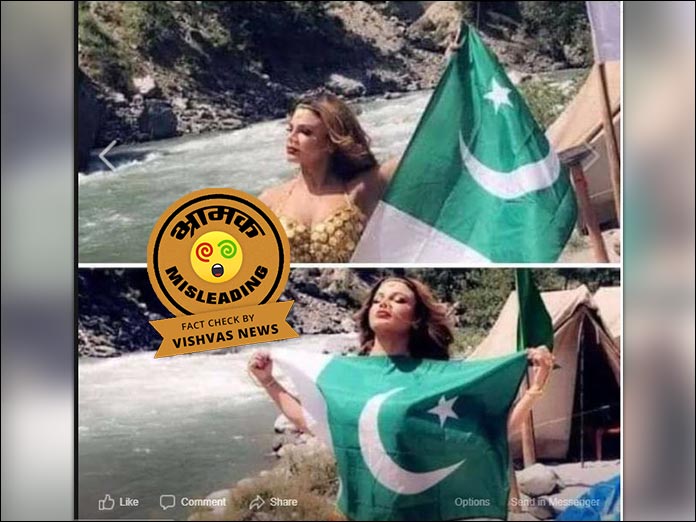 New Delhi (Vishvas News). A picture of Bollywood actress Rakhi Sawant with a Pakistani flag is viral on social media.

Vishvas News investigation revealed the claim is misleading. This picture of Rakhi Sawant is of her role in a film, where she can be seen posing with a Pakistani flag.

Many other users have shared this picture with similar claims on different social media platforms.

We searched the viral picture using Google reverse image search tool to find the original source. We found this picture in many news reports.

According to the report published on India Today’s website on 9 May 2019, Rakhi Sawant shared these pictures on her Instagram profile, mentioning about her role as a Pakistani girl in the upcoming film ‘Section 370’.

We contacted our colleague and Chief Correspondent for Bollywood Smita Srivastava in Dainik Jagran to verify the claim. She told that this picture is from last year and it was shared by Rakhi Sawant on her Instagram clarifying that the picture is of her character in film ‘Section 370’ .

We found these pictures on Rakhi Sawant’s Instagram profile posted on May 8, 2019, writing, ‘I love India but this is my character in the Section 370 film.’

These pictures can be seen in the video bulletin uploaded on May 8, 2019 on the official YouTube handle of ‘FilmiBeat’.

Vishvas News contacted Rakhi Sawant to verify the pictures.  “This picture was taken during the shooting of film Section 370. I played the character of a Pakistani girl,” said Sawant.

Sawant has also uploaded a video on her Instagram profile stating that it is a picture related to her character from the film.

Social scanning of the FB page that shared the viral pictures revealed that it has more than 50,000 followers and is active since 21 April 2020.

Conclusion: Rakhi Sawant’s picture with Pakistani flag is shared with misleading claims. These pictures were captured during the shooting of movie named Section 370 where she played the role of a Pakistani girl.