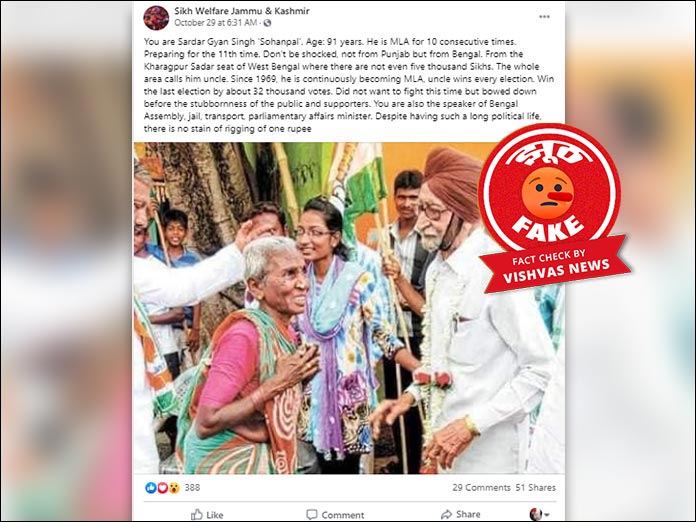 New Delhi (Vishvas Team). A picture of West Bengal Congress leader Sardar Gyan Singh Sohanpal is viral with a claim that Singh, a 10-time MLA is preparing to contest the election for the 11th time.

The archived link to this post can be seen here .

We searched for news reports on the Internet using keywords. We found many reports that informed us about the death of Gyan Singh Sohanpal on 8 August 2017. An article published on 9 August 2017 in Jagran.com states, “Former senior Congress leader and former MLA Gyan Singh Sohanpal passed away at 93. He breathed his last at 3.40 pm on Tuesday at SSKM Hospital in Kolkata.

Another news article by the Jagran.com reported on the success of Sohanpal’s political journey. “Sohanpal, born in Railnagri Kharagpur under West Medinipur district on January 11, 1925, started his public and political career in the 60s. He started contesting elections from 1962. However, he had to face consecutive defeats in the first three assembly elections held in 1962, 1966 and 1967. He won the 1969, 1971 and 1972 assembly elections. It was in the seventies that he got charge of the Ministry of Transport and Prisons in the cabinet of former Chief Minister late Siddharth Shankar Rai, but in 1977 he was defeated. After that, he continued to reach the assembly after winning consecutive records in the 1982, 1987, 1991, 1996 and 2001 assembly elections.”

We contacted Pranab Jha, Secretary, AICC and Communications Head of INC Congress.  ” We all know that Chacha, as he was fondly called by all passed away in 2017 at the age of 92. He had joined Congress Party in 1942 and continued to serve 10 terms in West Bengal assembly. He was also the transport minister in Siddharth Shankar Ray’s cabinet. He was so revered that WB government gave him a gun salute at his last rites.”

Social scanning of the Facebook page that shared the post revealed that it has 53,551 followers and was created in December 2014.

Conclusion: The viral post is fake. Sardar Gyan Singh Sohanpal passed away in 2017.