Fact Check: The Elderly woman in this picture is not ‘Shaheen Bagh Dadi’, Viral Claim Is Fake 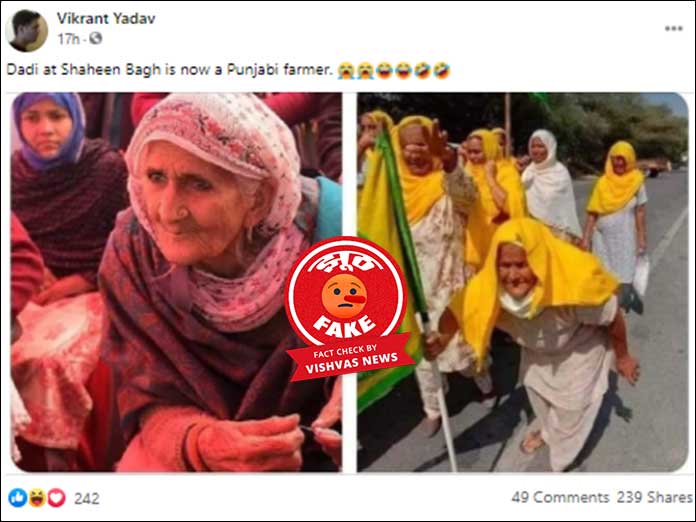 New Delhi (Vishvas News). Amid the ongoing farmers protest against Agricultural Law, a viral post with two pictures is shared with a claim that the elderly woman Bilkis Bano, who protested in Shaheen Bagh, Delhi against Citizenship Amendment Act (CAA), is participating in protest as a farmer.

Vishvas News investigation revealed the claim is fake. The woman in the picture is not ‘Shaheen Bagh Dadi’.

Facebook user Vikrant Yadav, uploaded a collage of elderly women on November 27, writing, “Dadi at Shaheen Bagh is now a Punjabi farmer.” The archived version of the Facebook post can be seen here.

“A wrinkled face, a sprightly and lean frame but defiant eyes. It was easy to tell Bilkis Bano apart from the crowd. The 82-year-old, who came to be known as the “Dadi of Shaheen Bagh”, was a defining presence at the prolonged protest against CAA at the small neighbourhood of Shaheen Bagh in southeast Delhi. On Wednesday, Time Magazine named Bilkis among the 100 most influential people in the world,” stated an article in the Times of India.

Several social media users have shared the pictures claiming to be of Bilkis Bano.

We also found this picture uploaded on 13 October in several Facebook pages.

Vishvas News contacted Bilkis Bano to verify the claim.  Denying the viral claims, her son Manzoor Ahmed said, “My mother is not there in the viral pictures… We are with the farmers and will participate in the protest soon.”

Facebook user Vikrant Yadav is one among the several users who had shared the viral post. Social scanning of his profile revealed that he lives in Gurugram, Haryana.

Conclusion: The viral post is fake. The woman in the picture protesting for farmers is not ‘Shaheen Bagh Dadi’ Bilkis Bano.