Fact Check: This Is Not The Picture Of Hathras Incident Victim, Viral Claim is Fake 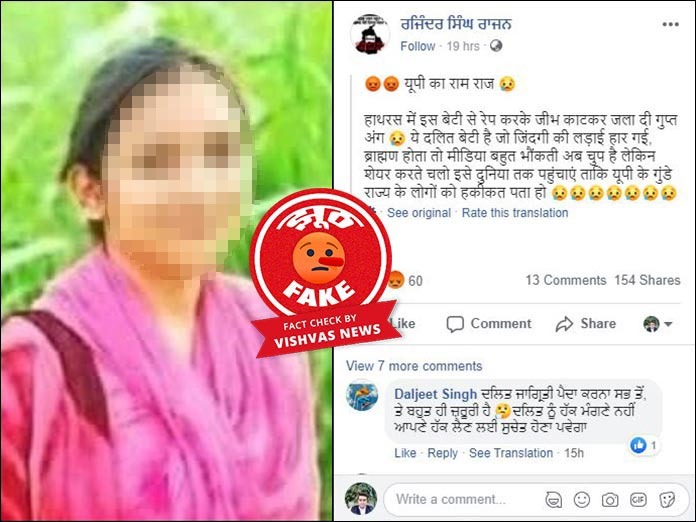 New Delhi (Vishvas News). A picture of a girl is viral on social media with a claim that she is the gang rape victim of Hathras, Uttar Pradesh.

Vishvas News investigation revealed the claim is fake. The photo of another girl is shared with fake claims linked to Hathras incident.

Many others have shared this picture with similar claims. Twitter user ‘Geet’ sharing this picture (archive link ) wrote, “My heart breaks just thinking about what this beautiful innocent girl must have endured (gang raped, tongue cut off, neck & spinal cord broken). No one should face such torture Broken heart. Enough is enough! Things needs to change..now!”

Dainik Jagran’s reporter and in-charge of Hathras, Himanshu Gupta, who covered the incident, said, “The viral picture is not of the Hathras victim.” Gupta confirmed this to several family members of the victim. He told us that this picture is of another girl.

Significantly, a video is also viral on social media, which is shared as of Hathras incident. Gupta said the video was recorded at the district hospital Hathras on September 14, in which the victim girl can be heard naming the accused. He told, “The girl belonged to the Dalit community and a case has been filed against the accused under the SC-ST Act.”

The viral post had claimed that after the rape victim’s, tongue was cut off. However, the Hathras police have denied these claims.

According to the news published on 30 September 2020 in ‘Dainik Jagran’, Chief Minister Yogi Adityanath has constituted a three-member SIT committee to investigate the village Boolgarhi case of Chandpa, police station area of ​​Hathras to investigate the matter and submit its report within seven days.

The user, who shared the viral picture with a false claim, has described himself as a promoter in his profile . This profile is active since August 2014.

Conclusion: The girl in the viral photo is not Hathras incident victim.