Fact Check: This picture is not from Tej Pratap Yadav’s convocation, viral claim is fake 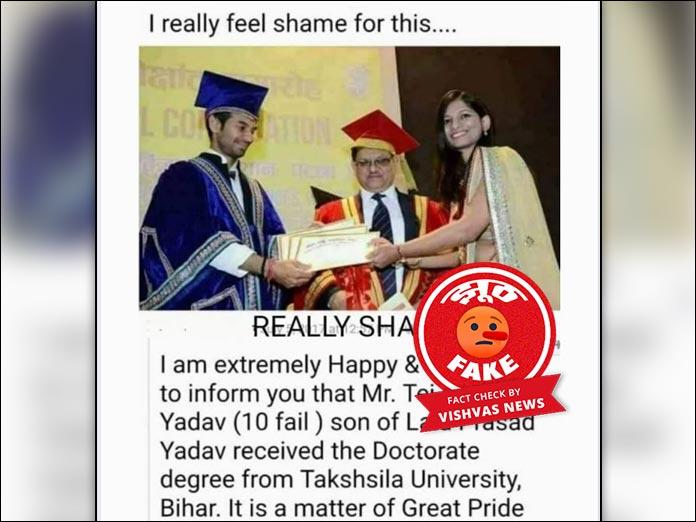 New Delhi (Vishvas News). A photo of Tej Pratap Yadav, the son Rashtriya Janata Dal (RJD) leader Lalu Prasad Yadav in a graduation ceremony is viral on social media. The post alleges that Tej, who had not even qualified Class X exams, is receiving doctorate from Takshsila University.

Vishvas News investigation revealed the claim is fake.  We found that this picture is viral since 2017. This picture of Tej Pratap Yadav, the State Health Minister distributing degree certificates in the convocation of Indira Gandhi Institute of Medical Sciences is viral with fake claim.

Facebook user Biswajit Dutt shared the picture (archive link ) captioned, “I really feel shame for this…I am extremely happy to inform you that Mr Tej Pratap Yadav (10 fail), son of Lalu Yadav, received the doctorate degree from Takshsila University, Bihar. It is a matter of great pride for all Indians. Congratulations to Dr. Tej Pratap Yadav. This can only happen in India. Jai Ho…”

This photo of Tej Pratap Yadav is viral on social media with similar claims since 2017.

To find the original source of the picture, we used the Google reverse image search tool. We found this picture in a tweet posted on 11 February 2017 from Tej Pratap Yadav’s Twitter handle. The tweet confirms that he attended the third convocation of IGIMS and gave away degree certificates and gold medals to the qualifying candidates.

In the news search, we found the article published by the Times of India on 12 February 2017. According to the report, “78 MBBS students, 20 post-graduate students, three super-specialty course students and 20 paramedics students were awarded degrees by the Health Minister Tej Pratap Yadav at the convocation held on the campus of Indira Gandhi Institute of Medical Sciences on Saturday…”

We could confirm that the viral picture is not from Tej Pratap Yadav’s convocation. This was a picture from a convocation program he attended at the IGIMS in Patna campus and not from Takshsila University as in the claim.

We also found a video of IGIMS convocation program held in 2017 where Tej can be seen distributing the certificates to the graduates.

We contacted Dainik Jagran.com’s Bihar in-charge Amit Alok to verify the claim. He confirmed that these pictures were from IGIMS convocation ceremony attended by Health Minister Tej Pratap Yadav.

Social scanning of the user who shared the viral picture revealed that he is from Kolkata.