Fact Check: This Video of People Waving BJP Flag Is From Jammu & Kashmir, Not From PoK 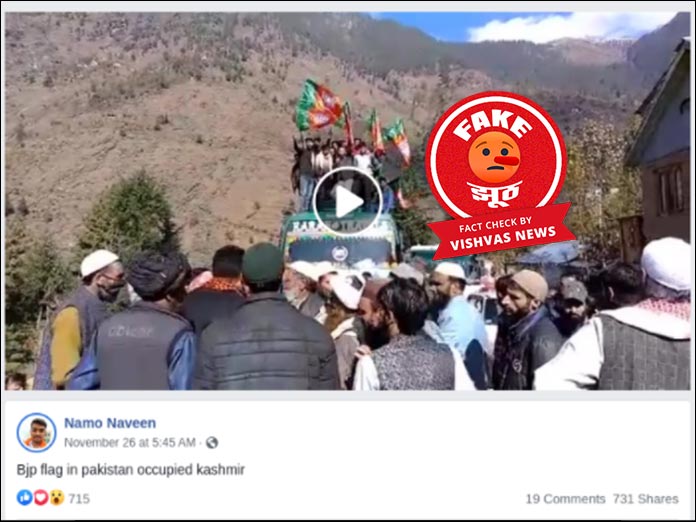 New Delhi (Vishvas News): A video is going viral on social media. In the video, people seem excited and are hoisting BJP flags and raising slogans. The user sharing the video claims it to be from PoK.

Vishvas News investigated the claim and found that the viral video was not from PoK but from Jammu and Kashmir.

The archive link of the post can be seen here.

Vishvas News investigated the video using the Invid tool and extracted the keyframes. We then searched the screengrabs using Google Reverse Image Tool. We found a video uploaded on the official Facebook page of the BJP’s Jammu and Kashmir unit on November 22, 2020, in which the video screenshots can be seen.

Vishvas News contacted Manzoor Bhat, the media head of the Jammu and Kashmir unit of the BJP. He said, “This video is about a recent election rally in Kishtwar, Jammu.” It is clear that the viral video is of an election rally of BJP and not of PoK.

Let us tell you that DDC elections and panchayat by-elections are being held in Jammu and Kashmir from November 28 to December 19 in eight phases.

Conclusion: Vishvas News investigated the claim and found that the viral video was not from PoK but from Jammu and Kashmir.