Fact Check: This video of protest during Bhagwant Mann’s press conference is old

In the investigation of Vishvas News, this video of sloganeering against Raghav Chadha and Aam Aadmi Party at the press conference of CM Bhagwant Mann turned out to be misleading. The viral video is old. 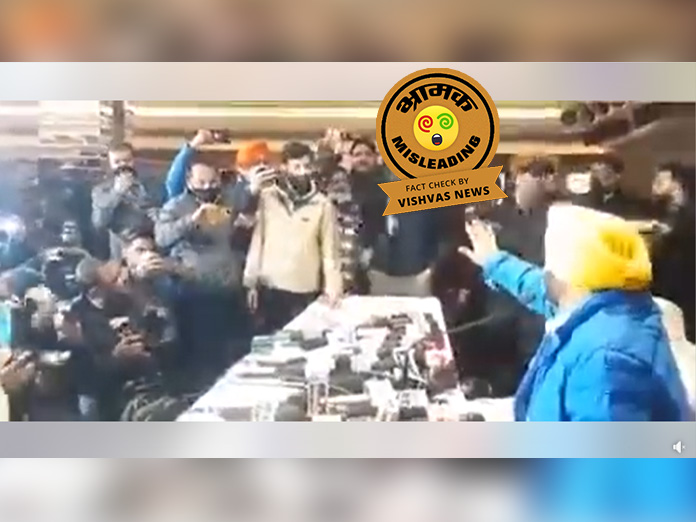 New Delhi (Vishvas News). A video related to CM Bhagwant Mann is getting viral on social media. In this 19-second video, people can be seen raising slogans against the Aam Aadmi Party’s Rajya Sabha member Raghav Chadha and CM Arvind Kejriwal. It is being claimed by sharing the video that this video of protest is recent. Vishvas News found in the investigation that this video is old. The related claim is also false.

To know the truth of the viral claim, we started searching the original video on Google with the help of keywords. We found viral videos uploaded in many places. The full video of this press conference was found on the YouTube channel named “Encounter News”. The video was uploaded on 24 January 2022. In the original video, viral clip can be seen in the beginning of the video. According to the information given in the video, “Bhagwant Mann, the CM face of the Aam Aadmi Party in Punjab, was fiercely opposed. There was a lot of abuse in the press conference of Bhagwant Mann. During this, slogans were raised against Aam Aadmi Party, Raghav Chadha and Arvind Kejriwal. Seeing the matter escalate, Bhagwant Mann apologized and saved his life.” Watch the full video here.

The news related to the viral video was also published on the website of “webkhabristan.com”. Screenshot of the press conference has been used in the news published on 24 January 2022. According to the news, in fact, Raghav Chadha, co-in-charge of Aam Aadmi Party in Punjab, had got Congress leader Dinesh Dhalla inducted into AAP in Punjab Press Club recently. During that time AAP leader Iqbal Singh Dhindsa and Dr Shivdayal Mali had reached there to protest, due to which some people started a ruckus in the press club. Even the property of the Press Club was damaged. Due to this act, there was deep anger among the journalists towards the Aam Aadmi Party. Today when Bhagwant Mann reached a hotel to hold a press conference, the journalists raised slogans.

The video was also uploaded on the official Facebook page of Punjab Congress on January 24, 2022. The caption read, “Journalists shouting slogans against Aam Aadmi Party at Bhagwant Mann’s press conference in Jalandhar. Journalists across the country are opposing the Aam Aadmi Party.”

It is worth noting here that in the video, along with CM Bhagwant Mann, everyone is wearing warm clothes. This clearly shows that this video is old.

For more details on the viral video, we got in touch with Manoj Tripathi, Senior Chief Reporter, Jalandhar, Dainik Jagran. We shared the link of the viral post with him. Manoj Tripathi told us, “This video is old. This is the video of the press conference of Bhagwant Mann held before the assembly elections in Jalandhar. The video is being shared with a false claim. These are all journalists seen protesting in the video.”

At the end of the investigation, we did a social scanning of the page that shared the misleading post. Scanning revealed that this page is followed by 291K people and this page was created on Facebook on 10th April 2018.

Conclusion: In the investigation of Vishvas News, this video of sloganeering against Raghav Chadha and Aam Aadmi Party at the press conference of CM Bhagwant Mann turned out to be misleading. The viral video is old.