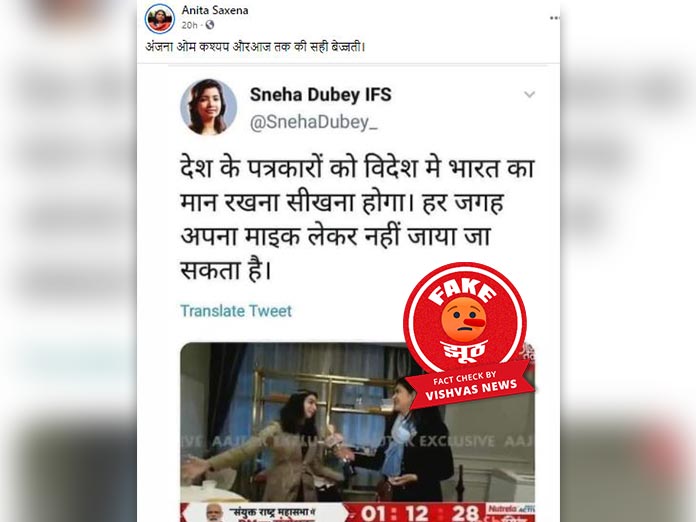 New Delhi (Vishvas News). A screenshot of a tweet related to IFS Sneha Dubey, who represented India at the United Nations General Assembly (UNGA), is going viral on Facebook. The Twitter handle of this screenshot has Sneha Dubey’s name and her profile picture. Tweet is being shared after a video of her asking journalist Anjana Om Kashyap to politely go out of the room went viral. The tweet asks journalists to respect the privacy of people. When Vishvas News checked this tweet, we found that this tweet is fake .This twitter account does not belong to Sneha Dubey.

Facebook user ‘Anita Saksena’ shared the screenshot of the tweet along with the video, and wrote ‘Journalists of the country will have to learn to respect India abroad. Can’t take the mic everywhere’. The tweet dated, 25 September 2021.

To begin our investigation, we first started searching the user handle of the viral screenshot @SnehaDubey_ on Twitter. In the search, we found a handle of the same name, but neither it now had a photo of Sneha Dubey nor did the user name write Sneha Dubey IFS. According to the bio of this account, it is a parody account, which was created in September 2021. We did not find a single tweet on this account.

Continuing the investigation, we tried to know if Sneha Dubey has tweeted about journalists. In the search, we could not find any such tweet officially made by her.

Vishvas News contacted Sanjay Mishra, assistant editor covering ministries in the National Bureau of Dainik Jagran, for confirmation about the viral tweet and he told us that “no such tweet has been made by IFS Sneha Dubey. She cannot tweet anything like this being in this position, it is against the protocols of the government. That’s why it is not possible for her to tweet such a thing.”

There is a video in the screenshot of the viral tweet. According to reports, news channel reporter Anjana Om Kashyap had come to take a bite from Sneha Dubey, when she politely asked her to leave without saying anything. You can read the news related to this matter here.

At the end of the investigation, we did a social scanning of the user Anita Saksena, who shared the fake tweet. This Delhi-based user is followed by more than 11 thousand users and is very active on Facebook.