Fact Check: UP CM Yogi Adityanath did not give this statement about Thakurs, viral claim is fake

The viral claim is fake. This graphic plate in the post is edited. CM Yogi Adityanath has not made any such statement. 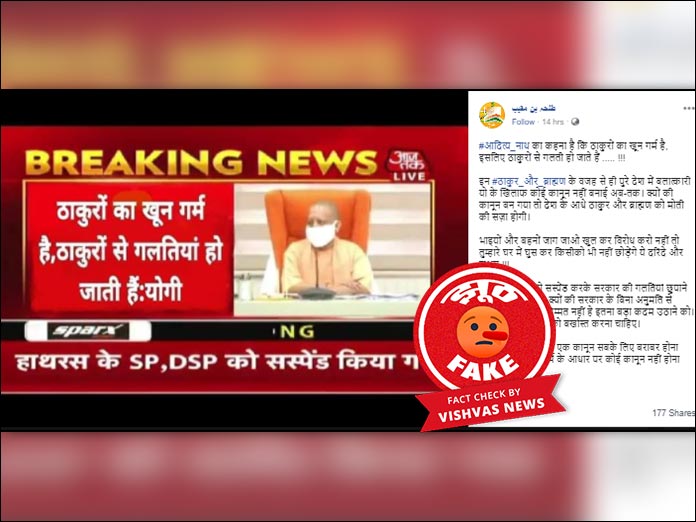 Vishvas News investigation revealed the claim is fake. The viral picture of the graphic plate is tampered. Yogi Adityanath has not made any such statement.

Facebook user طلحہ بن مقیب (Talha bin Mukib) shared a picture of graphic news plate on October 4 that attributes a quote to UP CM Yogi Adityanath. The caption reads, “”#Adityanath says that the blood of Thakurs is hot, so Thakurs make mistakes… The archived version of the Facebook post can be seen here.

We also found a tweet on Aaj Tak’s Twitter handle on October 3, 2020 that has alerted about the viral graphic plate confirming that Aaj Tak did not broadcast any such news.

We also scanned Yogi Adityanath’s twitter for verification. We did not find any statement as in the post. We could confirm that Adityanath has not given any such statement about Thakurs.

We contacted Rajdeep Sardesai, senior journalist of Aaj Tak to verify the graphic plate. Sardesai said that this breaking plate is fake.

Conclusion: The viral claim is fake. This graphic plate in the post is edited. CM Yogi Adityanath has not made any such statement.