Fact Check: Video of Tornado From Kenya Falsely Passed of As From West Bengal 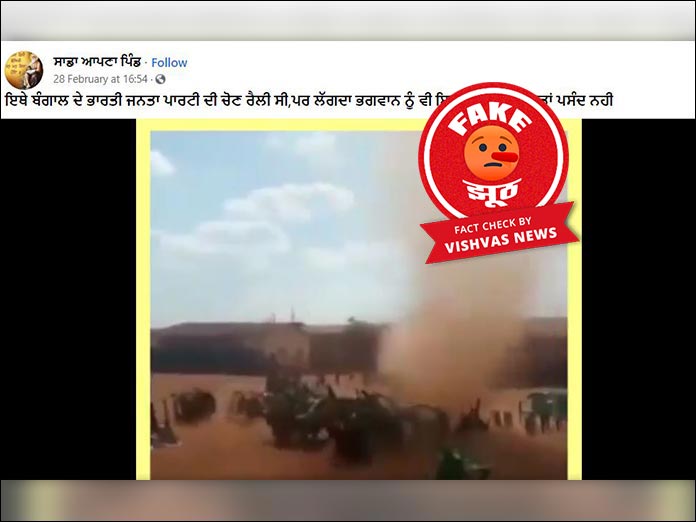 New Delhi (Vishvas News): A video is going viral on social media in which a storm can be seen blowing away the chairs in the air in a field. The video is claimed to be from West Bengal, where the incident took place duting a BJP rally.

Vishvas News investigated and found the viral claim to be fake. The viral video is about three years old and is during an event in Kenya.

Facebook user ਸਾਡਾ ਆਪਣਾ ਪਿੰਡ shared a video claiming: “Here in Bengal, an election rally of the Bharatiya Janata Pati was to be held, but it seems that even God does not want it due to their actions.”

Vishvas News started the investigation by searching the video using the InVID tool. We performed Google reverse image search of the screengrabs.. We found some reports published in the year 2018, including a video similar to the viral video. According to the report published on September 30, 2018, during a church event in Yukambani, Kenya, a tornado blew the chairs and electronic equipment in the air.

We contacted JK Vajpayee, Editor of Dainik Jagran in West Bengal, and discussed the video with him. He said that no such incident has been reported in Bengal recently and the video is not from Bengal.

This post was shared on Facebook by a page named ਾਾਡਾ ਪਪਣਾ ਪਿੰਡ. We scanning the profile of the page and found that the page has more than 10155 followers till date.

Conclusion: The video of a tornado from Kenya is falsely passed of as from West Bengal. The viral video is about three years old (2017).