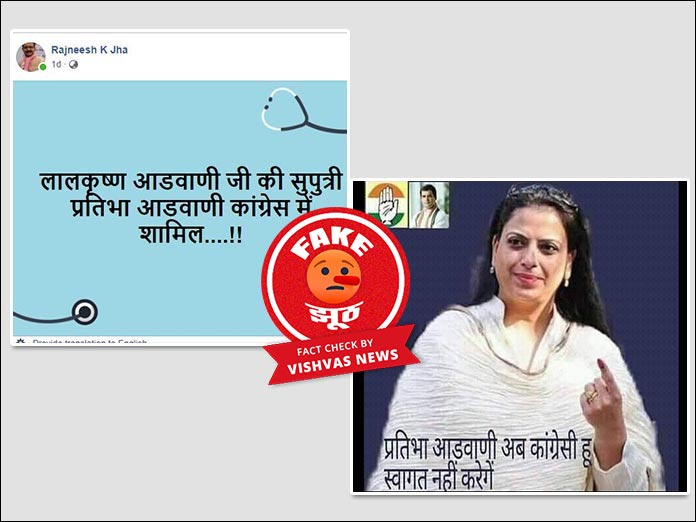 Rajneesh K Jha, a journalist by profession made a viral post on Facebook stating Pratibha Advani, daughter of LK Advani, joins Congress. The archived post can be accessed here.

Pratibha Advani is the daughter of senior BJP leader LK Advani and her joining the Congress party will be big news in itself. However, no such news was found in the news search, mentioning her involvement in Congress.

We could not find any such news on searching using the keywords ‘Pratibha Advani’.

Ashutosh Jha, our colleague and the national bureau chief of Dainik Jagran, described the claim as baseless. “There is no truth in claim of Pratibha Advani joining the Congress,” Jha said.

After this we contacted the office of LK Advani. We were told, “There is nothing like this. It is just a rumour.”

The BJP spokesperson Tejinder Pal Singh Bagga also denied this claim. “The claim about Pratibha Advani joining the Congress may be a deliberate rumour. There is no truth in it,” Bagga said.

User sharing the viral post is a journalist by profession. His profile has more than five thousand followers.