Vishvas News found in its investigation that the picture of Rahul Gandhi is being edited and shared with a false claim. The original picture has dry fruits on a plate and tea in a glass, which has been edited and changed with the intention of propaganda. 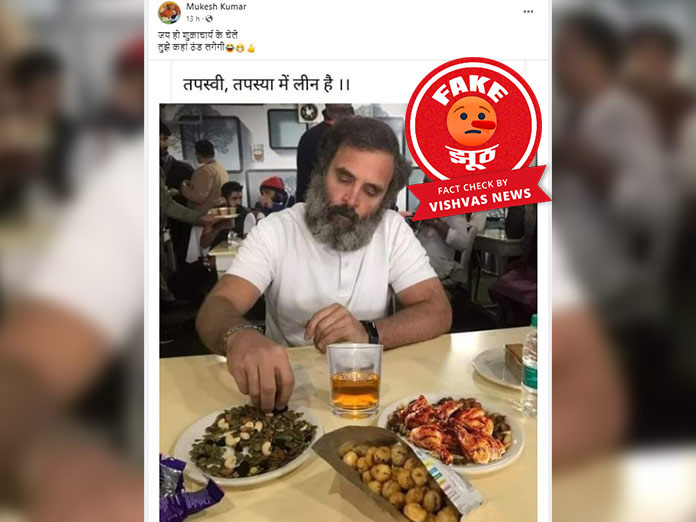 New Delhi (Vishvas News): After the Bharat Jodo Yatra of Congress reached Haryana in its second phase, a picture of party MP Rahul Gandhi went viral on social media, where he could be seen with dry fruits, chicken, and a glass of liquor on the table in front of him. While making this picture viral, some social media users are spreading false propaganda against Rahul Gandhi.

Vishvas News fact-checked this picture. On investigation, it was found that the picture of Rahul Gandhi is being edited and shared with a false claim. In the original picture, there is no chicken on the plate and no liquor in the glass. Investigation revealed that chicken and liquor were added to the original picture by editing it with the help of digital tools.

Another picture is viral on social media. In this, a man can be seen holding a tea kettle behind Rahul Gandhi.

The content of the post can be seen here. Other users are also making it viral. View its archived version here.

The journalist had shared the original picture of Rahul Gandhi on January 7, 2023. While sharing the picture, he said in the caption that he was going to Punjab, when he met Rahul Gandhi at a dhaba near Karnal. This picture is from that time.

For more information, we contacted Rajpal Bisht, a leader who attended the rally along with Rahul Gandhi. They told us, the viral picture was edited. Opposition parties are doing such wrong things to defame him. They want to malign the image of Rahul Gandhi, so they are adopting such methods.

This is not the first time that misinformation is being spread on social media regarding Rahul Gandhi and ‘Bharat Jodo Yatra’. Even before this, fake pictures and videos have gone viral many times. Ever since the inception of yatra, various kinds of fake claims keep going viral on social media. You can read their fact check report by clicking here.

At the end of the investigation, Vishvas News did a social scanning of the Facebook handle of Mukesh Kumar, the user who shared the fake claim. The user has more than 4,400 friends on Facebook. On scanning the profile we found that the user is influenced by an ideology.

Conclusion: Vishvas News found in its investigation that the picture of Rahul Gandhi is being edited and shared with a false claim. The original picture has dry fruits on a plate and tea in a glass, which has been edited and changed with the intention of propaganda.