Fact Check: Viral post about the chairmen of these temples is fake

Vishvas News investigated and found the claim to be fake. The chairmen of Tirupati Balaji Temple and Siddhi Vinayak Temple are Hindu. Also, the names mentioned in the viral post are incorrect. 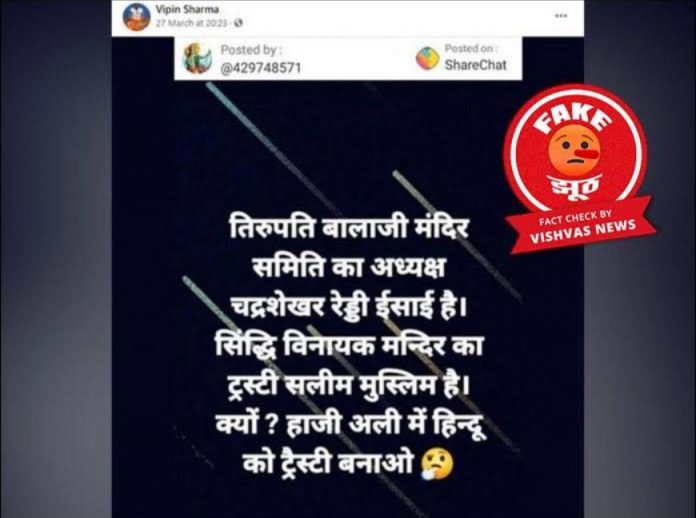 New Delhi (Vishvas News): In a video viral on social media, it is being claimed that the chairman of Tirupati Balaji temple samiti Chandrashekhar Reddy is a Christian, and the chairman of Siddhi Vinayak Temple trust Salim is a Muslim.

Vishvas News investigated and found the claim to be fake. Neither the chairman of Tirupati Balaji temple is a Christian and named Chandrashekhar Reddy, nor the chairman of Siddhi Vinayak temple trust is any Salim or a Muslim. Both the chairmen are the followers of Hindu religion.

Facebook user Vipin Sharma has shared the post with the text in Hindi that roughly translates: The chairman of Tirupati Balaji Temple samiti is Chandrashekhar, a Christian. The trustee of Siddhi Vinayak Temple is Salim, a Muslim. Why? Appoint a Hindu the trustee of Haji Ali.

We started our investigation by searching about the trust board of Tirupati Balaji Temple and its board members. We got the list of the same on the Temple’s website. As per the details available on the website, the chairman of Tirumala Tirupati Devasthanams trust board is YV Subba Reddy and not Chandrashekhar Reddy. We didn’t find anyone named Chandrashekhar Reddy on the list of the board members.

To know about the viral claim we contacted YV Subba Reddy over a call. He rubbished the viral claim and told us he is a Hindu by birth. Though he is a relative of the chief minister of Andhra Pradesh, Jagan Mohan Reddy who follows Christianity and Hinduism both, Subba Reddy and his family only follow Hinduism.

Now, it was time to check the second claim of the viral post. To check that, we searched for the Siddhi Vinayak trust board and its members on the internet. We found the details on the website of the temple itself. As per the website, Aadesh Bandekar is the chairman of the Siddhi Vinayak Temple trust. We didn’t find anyone named Salim on the list of the board of Trustees.

We ran a social scanning of the user Vipin Sharma who shared the post on Facebook and revealed that he hails from Gurugram, Haryana.

Conclusion: Vishvas News investigated and found the claim to be fake. The chairmen of Tirupati Balaji Temple and Siddhi Vinayak Temple are Hindu. Also, the names mentioned in the viral post are incorrect.