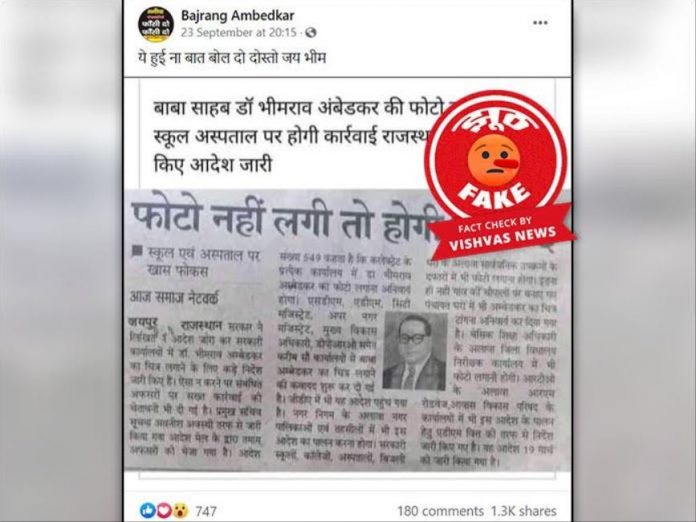 New Delhi (Vishvas Team). A post shared with an image of newspaper clipping claims that Rajasthan government has made it mandatory for all government offices, schools and hospitals to have a portrait of Dr Bhimrao Ambedkar.

Vishvas News received this claim for fact check on its WhatsApp chatbot (+91 95992 99372). Our investigation revealed the claim is fake. The image of the newspaper clipping in the post is tampered. Rajasthan Government has not issued any such order. However, Uttar Pradesh government issued this order in 2018.

Facebook user Bajrang Ambedkar shared a newspaper clipping allegedly from Jaipur that states, “Rajasthan government has issued a written order for government offices to have a portrait picture of Dr Bhimrao Ambedkar…” The archived version of the post can be seen here .

We read the article in the newspaper clipping for investigation. We found that there is no mention about Rajasthan government in the entire copy except in the dateline. The text below the dateline mentions about ‘Aaj Samaj Network’ through which we identified that it is a clipping of Aaj Samaj Newspaper.

We searched on the Internet using keywords. We found several news articles published in March 2018 about Uttar Pradesh government’s order that has made it mandatory for all government offices to have a portrait picture of Dr BR Ambedkar from April 1.

We tried to find if the Rajasthan government issued such an order. We could not find any authentic news reports on the viral claim. We searched this viral clipping using Google reverse image search tool. We found the original newspaper clipping in a tweet posted on 23 March 2018 with dateline as Ghaziabad. We could confirm that the viral image of the newspaper clipping has been tampered.

Vishvas News contacted the senior editor of Aaj Samaj newspaper. Pointing out to the difference in the font style of the dateline and uneven letters in the words (Jaipur and Rajasthan), he told us that the picture of the newspaper clipping is tampered. In addition, he also identified the uneven spacing and punctuations in the words.

Social scanning of the Facebook user who shared the viral post revealed that he is a school teacher.

Conclusion: The viral post is fake. Rajasthan government did not make it mandatory to have Dr Ambedkar’s portrait in all government offices.