Fact Check: VK Sasikala did not tweet about alliance against Islam community, viral claim is fake 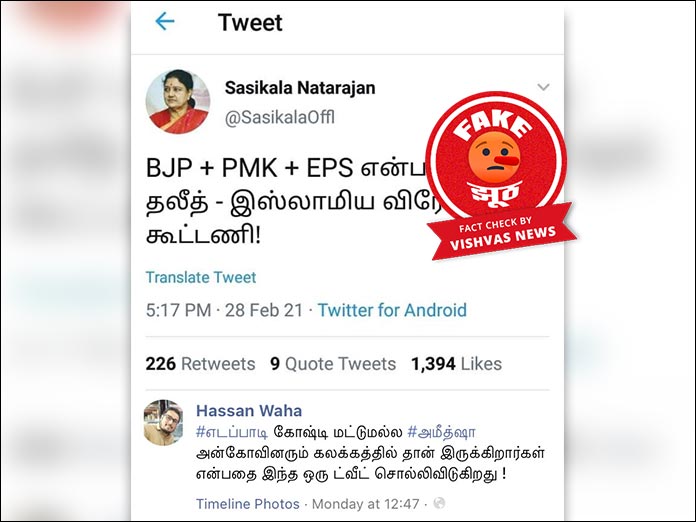 Vishvas News investigation revealed the twitter handle is fake and is not officially verified account. AMMK spokesperson denied the claims saying VK Sasikala has not made any such statement.

A picture of a tweet allegedly from Sasikala Natarajan ( SasikalaOffl) calling the alliance of BJP, PMK and EPS as Dalit alliance against the Islamic community. The archived version of the tweet can be seen here.

With the countdown having begun for the Assembly polls in Tamil Nadu, both the ruling AIADMK and the opposition DMK alliances have hit roadblocks. The AIADMK is in a fix as allies BJP and RSS want to facilitate re-entry into the party of ousted general secretary V K Sasikala, the closest aide of the late J Jalayalithaa, states an article in the Indian Express.

While we found news articles about VK Sasikala’s interest to have alliance with the AIADMK, we didn’t find any authentic news reports of any such deragatory statements from her about the ruling party on the Internet.

Vishvas News contacted Amma Makkal Munnettra Kazagam (AMMK) Spokesperson Arun Kumar for clarification. “She (VK Sasikala) does not have a twitter account. The is not the first time tweet has gone viral in her name,” he said.