The viral picture of Narendra Modi and Amit Shah along with RSS chief Mohan Bhagwat is edited. The edited picture of a film poster is being shared with the false claims. 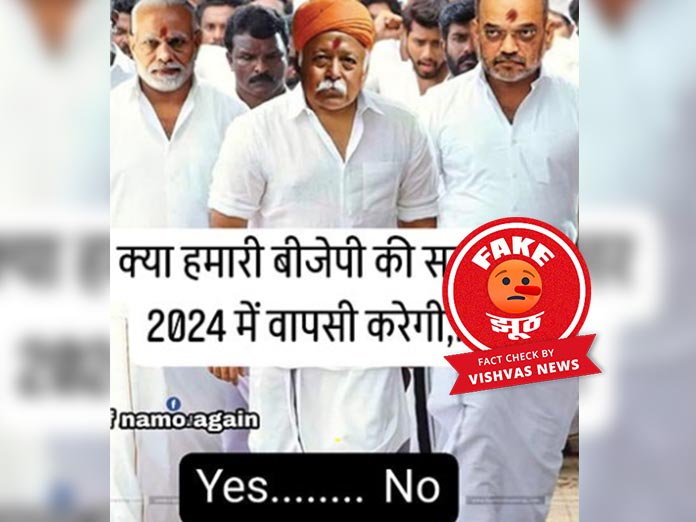 This picture turned out to be fake in Vishvas News investigation. Actually, it is a poster of a film, edited and shared with false claims.

Many other users have shared this picture with similar claims on different social media platforms.

The picture in the post is going viral. We used Google reverse image search to find out the truth behind the picture. In the search, we found the post of the film ‘ Lucifer ‘, which is very similar to the picture going viral.

We found the same post on the website of Amazon.com. We could arrive at conclusion that the film ‘Lucifer poster was photoshopped. We could also identify that the picture of famous south Indian actor Mohanlal has been edited and replaced as Mohan Bhagwat.

It can also be seen in the official trailer. In the three minutes 21 seconds trailer, the scene with the film’s poster can be seen at one minute 8 seconds.

The picture going viral is actually a fake photo edited using the film poster, in which the face of Mohan Bhagwat and two other actors standing behind him has been edited with pictures of Narendra Modi and Amit Shah.

Conclusion: The viral picture of Narendra Modi and Amit Shah along with RSS chief Mohan Bhagwat is edited. The edited picture of a film poster is being shared with the false claims.