The viral statement about the RBI in the name of Manmohan Singh is fake and fabricated. 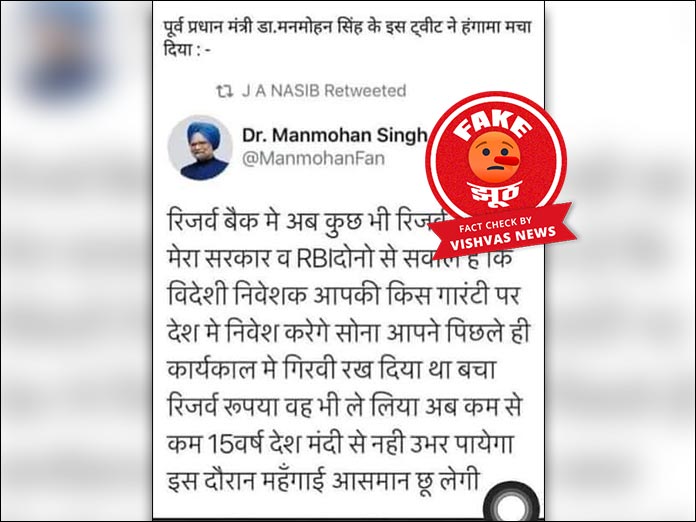 New Delhi (Vishvas Team). In a viral post on social media, a screen shot of Prime Minister Manmohan Singh’s tweet claims that the Reserve Bank of India (RBI) has run out of money and the country will not be able to recover from the recession for 15 years.

Vishvas News investigation revealed the claim to be false. The statement viral as Manmohan Singh’s quote is fabricated and has gone viral even in the past.

In a viral post (archive link ) on social media , Manmohan Singh has been quoted saying, “There is no longer any reserve in the Reserve Bank, the question to both my government and RBI is that on what guarantee will foreign investors invest in the country? You had pledged gold during your tenure only last year, you have taken the remaining reserve money as well. Now at least 15 years the country will not emerge from recession. During this time inflation will touch the sky.”

Facebook user ‘Dineshrai Dwivedi’ has shared the fake tweet in the name of Manmohan Singh, which Vishvas News has already investigated. A detailed investigation by Vishvas News can be read here, which examined both claims made in a viral post.

The first claim was that the Reserve Bank did not have any reserves, while the second claim was about gold pledged in the previous term of the Modi government. Both claims were found to be false in our investigation.

Former Prime Minister Manmohan Singh is not present on Twitter. Earlier, another fake tweet in Manmohan Singh’s name went viral, during which it was proved to be fake during investigation.  Saral Patel, the convener of the Congress’s social media cell explained about Singh’s Twitter handle. He wrote on Twitter, clarifying, “I am tired of telling people whether this account (Manmohan Singh) is authentic or not. This is not the first time and it will not be the last time either. So I am clarifying this forever. If Sonia ji and Manmohan Singh ji decide to come on Twitter, then it will be a verified Twitter account. So please do not follow this fake account.”

The user who shared the fake tweet, in his profile, has described himself as a lawyer, who hails from Rajasthan. More than six thousand people follow his profile.

Conclusion: The viral statement about the RBI in the name of Manmohan Singh is fake and fabricated.