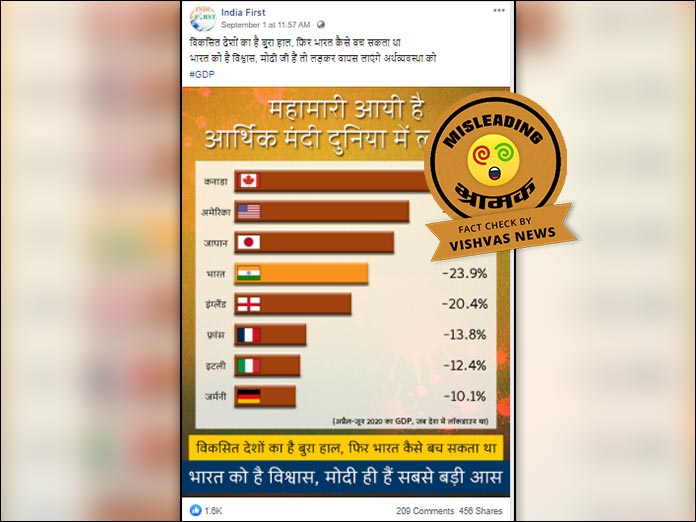 New Delhi (Vishvas News): A graphic going viral and widely shared by many people on social media shows the GDP data of the April-June (2020) quarter of G7 countries. It is claimed that the April-June Quarter data of the US, Canada, and Japan is worse than India’s GDP data. In the detailed investigation by Vishvas News, it was found that the data of few countries is misleading and wrongly compared to India’s figures.

The post is in the form of graphics and text written by the user. The Graphics claims that it is the April-June Quarter (2020) data of 8 countries, and the data is mentioned in this sequence-

Such graphics started floating in social media on the day when India’s April-June Quarter numbers were announced and it touched the bottom peak at -23.9%, which is termed as the lowest since Independence. After the numbers were announced, Business Today tweeted India’s Apr-June Quarter data comparing it with that of G7 countries (US, Canada, Japan, Germany, Italy, France, and UK).

Soon after Business Today tweeted the graphics, it went viral and was shared widely by people on social media. Later, social media platforms got flooded with some other graphics in which people claimed that the BT got the numbers wrong and the post shared above was one of those messages which claimed that it’s not India, but countries like Canada, the US, and Japan which actually performed worse in the G7 group.

Below is the screenshot of Business Today tweet which it deleted and later posted the revised numbers as the first graphics had some issues in the data of a few countries mentioned in the list.

BT had posted the tweet with the first graphic at 2.21 pm on August 31 which it deleted a day later. Below is the screenshot of the tweet which is not available now on BT’s Twitter account.

A day later, BT posted another tweet with revised graphics at 2.18pm on September 1.

The previous tweet posted by BT had no details on whether the GDP data of G7 countries were compared on a QoQ basis or YoY basis.

In the revised tweet, BT mentioned the duration and changed the data of a few countries.

Vishvas News did a detailed research to see the April-June Quarter performance 2020 (YoY) of India and other countries of G7.

According to a report in Bloomberg, the Indian economy contracted by a record of 23.9% in the April-June quarter in 2020. India’s real GDP fell to 26.9 lakh crore in constant terms, 23.9% lower than a year ago, according to the data released by the Ministry of Statistics and Programme Implementation. Nominal GDP fell to Rs 38.08 lakh crore, 22.6% lower than the same period last year. In gross value-added terms, the economy contracted 22.8%, the Bloomberg report said further.

Gita Gopinath, Chief Economist of the International Monetary Fund (IMF), also confirmed that India’s GDP may have contracted the most among the G-20 peers in the April-June quarter (25.6 per cent) of FY21. She shared a detailed graph on Twitter showing the gross domestic product (GDP) growth rate of G-20 economies on a quarter-on-quarter non-annualised basis. However, she also said that she expects the economic recovery to take place in the September quarter.

Now let’s talk about the April-June Quarter GDP data (2020) in comparison with their data in the same quarter a year back (YoY) – the duration which was missing in BT’s first graphic and mentioned in the revised graphics. The viral Facebook Graphics says ‘It’s of April-June GDP when India was under lockdown.’

The first BT graphic had mentioned it as -9.5%. It corrected the numbers in its revised tweet as -9.1%.

The viral graphic says it is -32.9%. In reality, the data (-32.9%) is based on the annualised rate. The estimate released by the Bureau of Economic Analysis says the Real gross domestic product (GDP) decreased at an annual rate of 32.9% in the second quarter of 2020 in the US.

What does annualised data mean in the US economy?

As per the website of Federal Reserve Bank of Dallas, In this method, growth rates are adjusted to reflect the amount a variable would have changed over a year’s time, had it continued to grow at the given rate. The result is a percent change that is easily comparable to other annualized data. The annualizing methodology offers a simple way to compare the growth rates of economic variables presented across different periods. Analysts can regularly assess the monthly or quarterly performance of key economic indicators relative to their changes in recent years. Annualized rates of growth in monthly or quarterly data are generally only calculated for data that are not seasonal, or that have had the seasonality removed.
You can read the details here.

A New York Times report with heading – ‘Here is how to interpret today’s G.D.P. numbers.’, says – In the United States, G.D.P. isn’t reported as a simple change from one quarter to the next. It’s reported as an annual rate. (Technically a seasonally adjusted annual rate.) Think of it this way: If this rate of change held steady, this is how much G.D.P. would grow or shrink over a full year.

A negative 35 percent annual growth rate would mean economic output was 10.2 percent smaller in the second quarter than in the first.

You can read the entire report here.

This is why the annualised rate on the basis of America’s April-June Quarter 2020 is mentioned as -32.9%. Whereas the YoY change is 9.1% (31.7% annualised), which is the comparable figure to India’s April-June YoY data of -23.9%. And it was the worst drop ever for the United States, with the closet previously coming-in mid 1921.

More details can be seen here.

Italy’s economy shrank a downwardly revised 12.8% in the second quarter from the previous three months. On a year-on-year basis, GDP in the April-June period was revised down to -17.7% compared with the -17.3% printout in ISTAT’s flash estimate on July 31.

Statistics Canada has said the real gross domestic product contracted at an annualized rate of 38.7 per cent for the quarter, the worst posting for the economy dating back to when comparable data was first recorded in 1961.

The viral Facebook graphic says it is -10.1% which is incorrect.

The Viral graphic also mentions the annualised rate of -27.8% as Japan’s April-JUne quarter GDP number, which is again misleading because as per the reports Japan’s April-June quarter (YoY) GDP data is -9.9% .

Japan’s economy shrank 7.8% in April-June quarter from the preceding quarter, or at an annualised pace of 27.8%, the Japan Cabinet Office said in a report, as private consumption and exports bore the brunt of the coronavirus pandemic.

The Gross Domestic Product (GDP) in Japan contracted 9.90 percent in the second quarter of 2020 over the same quarter of the previous year, says tradingeconomics.com website.

Britain’s gross domestic product slumped by 21.7 percent year-on-year in the second quarter of 2020, the biggest fall since comparable records began in 1956. Read here for more details.

Vishvas News talked to Mr. Sachchidanand Shukla, Chief Economist to Mahindra Group on this confusion on the April-June 2020 GDP numbers of G7 countries. While talking to Manish Mishra of Jagran New Media, Shukla said, “Few corrections were required in the first graphics released by the Business Today which they corrected in the revised graphics issued a day later.” He also said that GDP numbers are survey based numbers on estimates and these numbers keep changing. He said: “Generally, there are three revisions of every year’s GDP numbers. The BT has possibly taken the first estimate numbers, which it revised in the fresh graphics.”

Vishvas News also contacted Business Today Editor Rajeev Dubey on the revised tweet posted by the website, on which he told the author to check the tweets shared by him. He also said that some social media users got confused with annualised rates as well.

To add more clarity on this, Business Today on September 3 posted three different graphics in one tweet to end all the confusion. The first graphics talks about YoY GDP numbers of India, China and G7 countries, the second graphics shows the ‘Annualised numbers’ and the third graphics gives the details of QoQ numbers of all 9 countries.

The details can be seen on this Tweet here.

The post is shared on Facebook by a page named India First. When we scanned the profile of the page we found that the page has followers 2,719,873 till date.

Conclusion: The graphics shared by the user, which says the US performed worse than India in April-June Quarter (YoY) data, is not correct. India’s April-June YoY GDP number as of the estimates till now is -23.9, and America’s number in the same comparison is -9.1%. The Viral claim is misleading.