Vishvas News in its investigation found that this video is not recent. The video is from 2019. 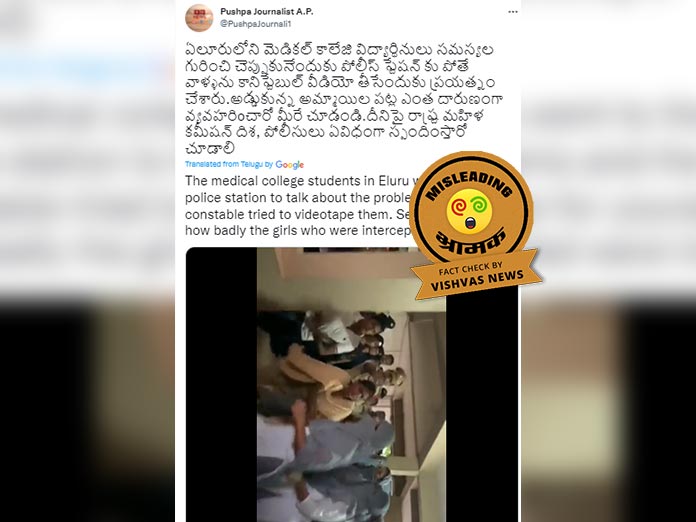 New Delhi (Vishvas News). A video is viral on social media where a scuffle broke out between some women students and policemen. Sharing the post, users are claiming that the video is recent. Vishvas News in its investigation found that this video is not recent. The video is from 2019.

Facebook user ‘Basimsetty Gopi’ (Archive) shared the viral footage and wrote, “Translated: Amaravati: The constable tries to videotape students of the medical college in Eluru when they go to the police station to talk about the problem. See for yourself how badly they treated the girls. We need to see how the state women’s commission and police react to this…”

We used a keyword search to investigate the viral video. We did not find any recent report on any such incident, but there were many reports of such an event in 2019. According to the news published on 5 May 2019 on thelogicalindian.com “In a shocking incident, a peaceful protest turned violent after a cop trying to capture the demonstration on his phone ended up assaulting a medical student on May 1. The incident took place in Alluri Sitarama Raju Academy of Medical Sciences (ASRAMS) when a group of medical students, who were protesting against the management, met the police officials.” According to reports, a constable in civil uniform was recording girl students. When the students saw this, they tried to snatch the camera from him. This is where the scuffle started.

We also found the same video uploaded on a YouTube channel named Philomina in 2019.

We contacted ASRAM Medical College, Hospital and Research Center via phone in this regard. The Administration Controller of the college told us that no such incident has happened in the college recently. However, the video is from 2019 when this incident took place.

User Basimsetty Gopi, who shared the viral video with a misleading claim, is followed by more than 9000 people on Facebook.

Conclusion: Vishvas News in its investigation found that this video is not recent. The video is from 2019.