On November 14, Jawahar Lal Nehru was trending on Twitter with several altered pictures and objectionable claims. In this report, we have included fact-check reports of some of the most shared images targeting Nehru. 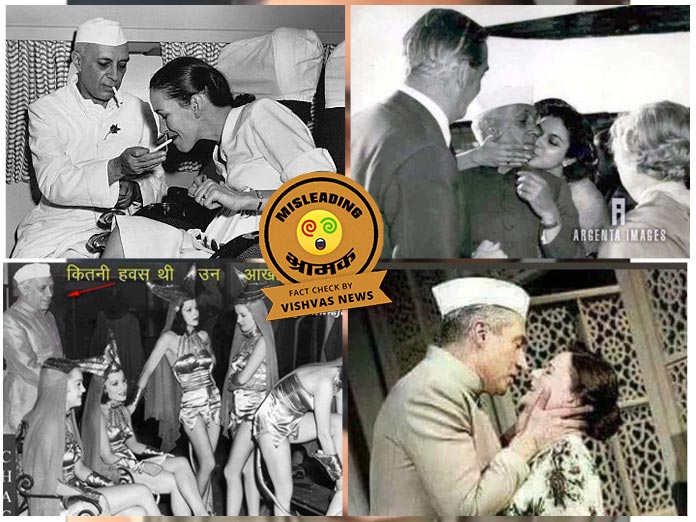 New Delhi (Vishvas News): Children’s Day is celebrated every year on November 14 on the birth anniversary of the first Prime Minister of India, Pandit Jawaharlal Nehru, and during this time, many programs are organised across the country, keeping children in mind.

On November 14, the leader was trending on Twitter (archive link) with several altered pictures and objectionable claims. In this report, we have included fact-check reports of some of the most shared images targeting Nehru.

Nehru is not there in the viral picture as it is from a play called ‘Drawing the Line’, in which Lucy Black played Lady Mountbatten, and Silus Carson played Nehru. This image has been used in a report dated December 11, 2013, on the website of metro.co.uk.

The woman in the picture with Nehru is his niece Nayantara. This picture of him is from July 8, 1955, when Nehru arrived at London Airport and was received by sister Vijayalakshmi Pandit, niece Nayanthara and then British Prime Minister Anthony Eden.

The frame of the picture going viral can be seen in the 27th-second frame in the YouTube video. Vishvas News has fact-checked this image several times, the report of which can be read here.

The picture has been going viral on social media from time to time with the claim that the woman seen with Nehru is Edwina Mountbatten, wife of the last Viceroy of India. The truth is that the woman in the picture is Simone, the wife of the British Deputy High Commissioner onboard India’s first BOAC flight. The fact-check report of this photograph can be read by clicking here.

This edited picture of Nehru is one of the most viral pictures on social media. This picture is fake and has been edited and digitally created. The difference between the fake and the original picture can be seen in the collage below.

Vishvas News has fact-checked this image on several occasions before, the report of which can be read here.

From time to time, an alleged genealogy of Nehru also goes viral on social media, claiming that the ancestors of the Nehru family were Muslims. This fabricated genealogy has been shared to spread propaganda against the Nehru-Gandhi family. Our fact-check report examining the viral claim can be read here.

Conclusion: On November 14, Jawahar Lal Nehru was trending on Twitter with several altered pictures and objectionable claims. In this report, we have included fact-check reports of some of the most shared images targeting Nehru.