Fact Check: Banks have not announced Strike in September, viral post is fake 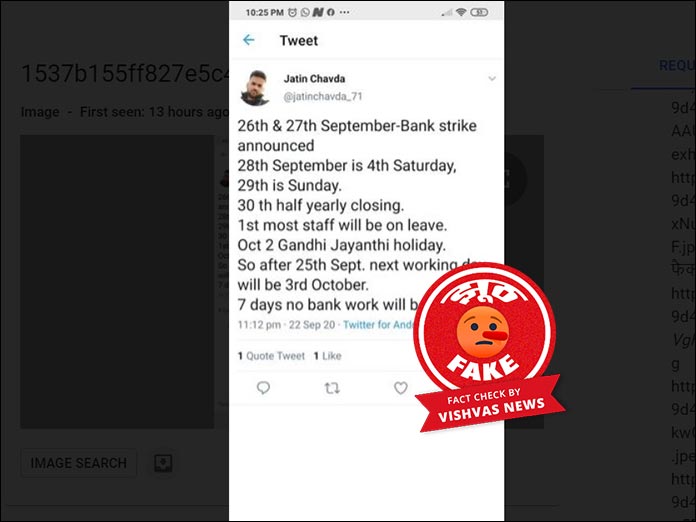 New Delhi (Vishvas News). A viral post on social media claims that Banks have announced a strike on 26 and 27 September. The post has listed a number of holidays stating that banks will reopen on October 3 after 7 days leave.

Vishvas News received this claim for fact check on our WhatsApp chatbot (+91 95992 99372). Our investigation revealed the claim is fake.

Twitter Jatin Chavda posted a tweet writing, “26th & 27th September-Bank strike announced
28th September is 4th Saturday,
29th is Sunday.
30 th half yearly closing.
1st most staff will be on leave.
Oct 2 Gandhi Jayanthi holiday.
So after 25th Sept. next working day will be 3rd October. 7 days no bank work will be there.”

“The planned bank strike by employees of public sector banks on September 26-27 has been called off, after the government acceded to some demands of the unions,” stated a report published by the Times of India on 24 September 2019.

We also found an article published by The Hindu last year in which it has clarified that banks will not be off for seven days, while it is true that some unions have planned for a strike.

We could confirm that this message is viral since 2019.

We observed the dates mentioned in the viral post and we could identify that the dates matched with last year’s calendar. We found that users are sharing the old post without checking the dates of the current year.

Vishvas News contacted RK Sharma, general secretary of All India Punjab National Bank Staff Federation to verify this claim. He denied the claims made in the viral post and clairifed that banks have not planned any strike.

An RBI official also said that no such strike has been reported so far. He told us that even if there is a strike, banks would make arrangements for availing cash in ATMs, so that consumers do not face any trouble.

Social scanning of the user who shared this viral post revealed that his account was created in August 2020 and has 1606 followers.

Conclusion: The viral claim is fake. Banks have not announced any strike.