The video going viral is of Rahul Gandhi paying tribute at Veer Bhoomi, the memorial site of former prime minister Rajiv Gandhi, and the tweet of Supriya Shrinate seen in it has been edited and added. 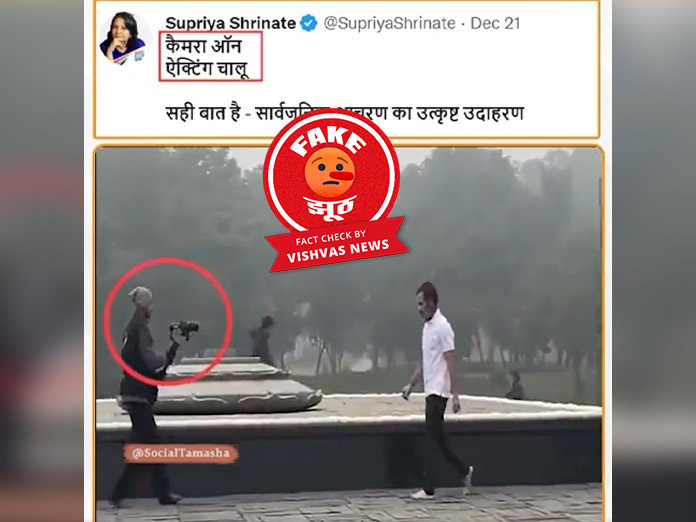 New Delhi (Vishvas News): In a video going viral on social media amid Congress’ ‘Bharat Jodo Yatra’, Rahul Gandhi can be seen taking a round of a memorial while a cameraman films him. It is being claimed that Congress party spokesperson Supriya Shrinate taunted Rahul Gandhi while tweeting this video.

Social media user ‘Poochta Hai Bharat’ shared the viral video (archive link) with a screenshot of Supriya Shrinate’s tweet (Camera on, acting chalu…. correct – excellent example of public conduct). From this, it appeared that Supriya Shrinate commented on the conduct of the leader of her own party.

A Twitter search found the tweet of Congress spokesperson Supriya Shrinate, which has been edited and added to the viral video.

On December 21, 2022, Amit Malviya, in-charge of the National Information and Technology Department of the Bharatiya Janata Party (BJP), targeted Rahul Gandhi by tweeting a video of him, in response to which Supriya Shrinate shared the video of Prime Minister Narendra Modi. In the collage below, it can be clearly seen how the screenshot of this tweet has been added to Rahul Gandhi’s video.

The video of Rahul Gandhi seen in the viral post is from December 26, when he had visited the memorials and paid homage after the ‘Bharat Jodo Yatra’ reached Delhi. On this day, he also went to Veer Bhoomi, the burial place of former prime minister Rajiv Gandhi. The official Twitter profile of West Bengal Youth Congress shared the video of the event.

Some parts of the same video are being shared by adding Supriya Shrinate’s tweet to the viral video, which makes it look like the Congress spokesperson is commenting on her own leader, whereas her tweet was aimed at PM Modi, which has been mentioned above.

Pictures of Rahul Gandhi visiting Veer Bhoomi to pay tribute to Rajiv Gandhi have been shared from the official Twitter handle of the Congress.

Earlier, a video of Rahul Gandhi went viral, in which it was claimed that while addressing a public meeting, he said that if he becomes the Prime Minister of the country, he will bring down inflation within two months and if could not do so, he will leave the country. Vishvas News, in its investigation, found this claim to be a fake propaganda. A fact-check report on it can be read here.

Vishvas News contacted Uttar Pradesh Congress spokesperson Abhimanyu Tyagi regarding the viral video. Describing the video as fake, he said Supriya Shrinate’s tweet seen in it was actually a tweet on PM Modi’s “showy conduct”. Since the launch of the ‘Bharat Jodo’ campaign, there has been a spurt in the cases of propaganda against Rahul Gandhi.

According to an analysis report by Vishvas News, misinformation related to the ‘Bharat Jodo Yatra’ has been among the top mis-information trends of 2022. The report of Vishvas News can be read here.

The account sharing the viral video with the false claim is a public group with over four lakh members.

Conclusion: The video going viral is of Rahul Gandhi paying tribute at Veer Bhoomi, the memorial site of former prime minister Rajiv Gandhi, and the tweet of Supriya Shrinate seen in it has been edited and added.