This claim has turned out to be false in the investigation of Vishvas News. Actually, this picture is edited. In the original picture, Cristiano Ronaldo was holding a Guinness World Record certificate, not a sketch of Nepali Rapper Yama Buddha. 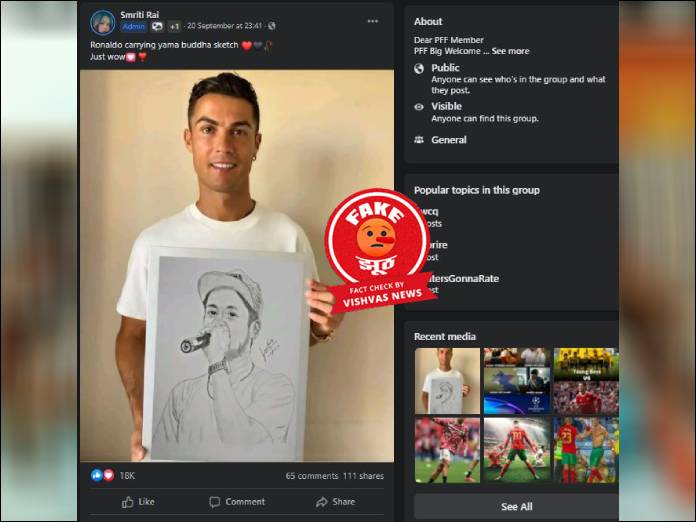 Vishvas News (Guwahati) : A picture of Manchester United Football Club superstar Cristiano Ronaldo is going viral, in which he can be seen holding a sketch of Nepali Rapper Yama Buddha in his hands. In the investigation of Vishvas News, this picture was found to be morphed. In the original picture, Ronaldo was holding a Guinness World Records certificate, not the sketch of Yama Buddha in his hand.
What is going viral?

Vishvas News first used Google reverse image search tool to probe this post. We found this picture uploaded on the official Facebook Page of Cristiano Ronaldo. In the real image, he was holding a certificate in his hands, not any sketch. We also found this on the verified Facebook Page of Guinness World Records. Cristiano was given this certificate from Guinness World Records on September 3, 2021 for Becoming Highest Scoring Man in International Football.

We also found this picture in a news article on https://www.guinnessworldrecords.com/. One can view the news by click here. Even many news websites from all over the world had published the story with this same image.

The similarity between both the pictures can be seen in the collage below.

We reached out to The Assam Tribune Sports Bureau head Abdul Gani regarding this. When asked about this picture, he told us, “This picture was taken after Cristiano received the Guinness World Records certificate after The Portugal captain scored a goal against Ireland in a World Cup qualifier, moving ahead of former Iranian striker Ali Daei on 2 September 2021. In this match, Cristiano, who captained the Portugal Football team, scored 2 goals, becoming the highest-scoring man in international football history with his 111th goal for Portugal. So, now-viral image is edited.”

Now it was time to scan the profile of the user Smriti Rai who shared the post on Facebook Group Portugal Football Fans. Upon scanning the profile, we found it to be a fan page. The user has 1090 followers. She is from Terhathum, Nepal.

Conclusion: This claim has turned out to be false in the investigation of Vishvas News. Actually, this picture is edited. In the original picture, Cristiano Ronaldo was holding a Guinness World Record certificate, not a sketch of Nepali Rapper Yama Buddha.