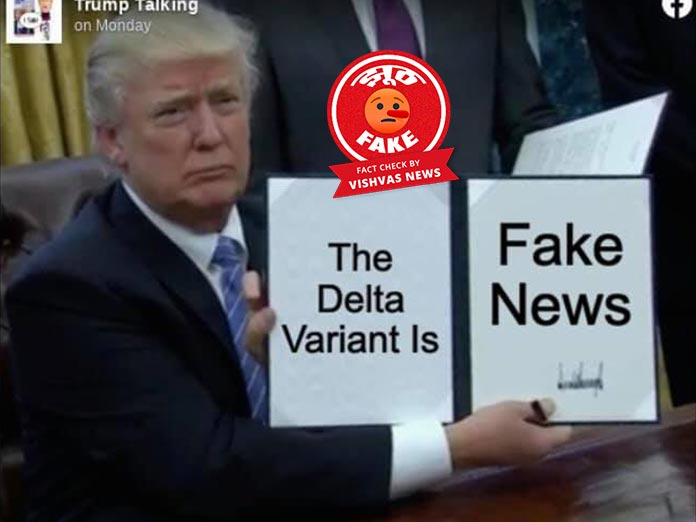 New Delhi (Vishvas News): A post going viral on social media shows a picture of former US President Donald Trump, in which Trump has an executive order in his hands, on which it is written Delta Variant is fake news. Vishvas News investigated the viral post and found that the viral post with Trump’s picture is altered with a fake text.

A post shared by a Facebook user named Gene Hiett shows an executive order in the hands of former US President Donald Trump. The order reads, “Delta variant is fake news.”

The archived version of the viral post is can be seen here.

Vishvas News started its investigation by performing Google Reverse Image Search of the viral post. We found a picture from 2017 in which the then-President Donald Trump had signed on to exit the Trans-Pacific Partnership. And a picture from that incident was used to create many similar memes. An archived of this picture is available here.

Maria Van Kerkhove, the technical head of the WHO’s Health Emergency Program, while discussing the delta version, said, “Where the delta variant is identified, it tends to spread more rapidly among people than the alpha variant.”

According to the CDC’s estimates, the Delta variant became dominant in the country over the two weeks that ended July 3, 2021 with 51.7% cases linked to the variant.

We scanned the profile of the Facebook user named Gene Hiett who shared the viral post. We found that the user is based out of Georgia.