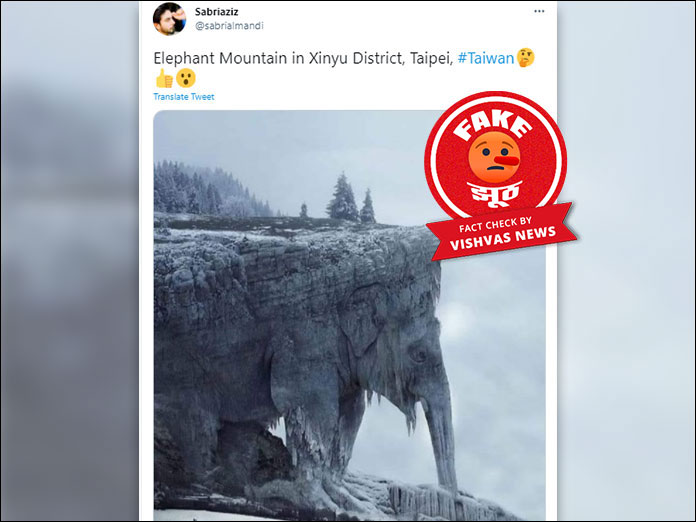 Vishvas News did a Google reverse image search on the viral photo. We could not find any such place as shown in the viral post.

We did the Google reverse image search of this picture in two parts. Firstly, we searched the photo of the mountain. We found the picture of the mountain on Shutterstock‘s website. But here there was no elephant under the mountain.

Then, we performed Google reverse image search of the photo of the elephant in the picture. We found the photo on pixabay.com.

It was clear that the picture was edited but we still searched for further information. We found the viral picture on several Facebook posts. In many posts, the picture credit was given to a user named Mirekis.

When we searched, we found the viral picture uploaded in 2018 on the page of a Facebook user named Mirekis. In a comment written below the picture, Mirekis wrote that this is not a real picture, but a picture made digitally by mixing some pictures. As per his profile, he does Artistic Photography.

Vishvas News contacted the Facebook user named Mireckis via Facebook Messenger for more information about this picture, and asked about the source of this picture. Replying to our query, he said, “I have made this picture by combining some pictures. This is not a real place, but my imagination.”

We scanned the profile of the user @sabrialmandi who shared this post on Twitter. We found that 3,435 people follow this user till the time of writing this fact checked article.

Conclusion: Vishvas News investigated the viral post and found the claim to be false. The photo of the mountain seen in the viral picture is edited. The real mountain does not look like an elephant. The viral picture was made by a digital artist.