Vishvas News found in it’s investigation that the Guwahati High Court has not given verdict to stop all madrassas in the state as mentioned in this viral post. Only state government funded provincialized madrasas will be closed. So this viral post is misleading. 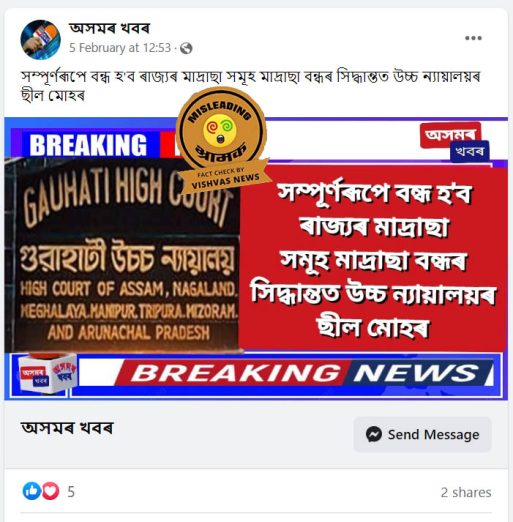 Guwahati (Vishvas News): A post has gone viral on social media claiming that the Guwahati High Court recently ordered a complete closedown of Madrassas in Assam. Even some media outlets have reported the news. Vishvas News found in it’s investigation that the claim is misleading. The Guwahati High Court has ruled in favor of shutting down madrassas in Assam that are running with state government funds. The verdict will only lead to the state’s provincial madrasas being converted into general schools. “Community Madrasas” or “Qawmi Madrasas” and “Maktabs” will continue as before.

Also a photo of a breaking news plate has been shared. Where the same is written and the post contains a photo of the Guwahati High Court. Similar posts have also been shared by other social media users.

You can view the archive link of the post by clicking here.

Vishvas News started searching with relevant keywords on Google and found various news stories. According to news reports, the Guwahati High Court has ruled that the provincial madrasas running with state government money in Assam will be converted into general schools from now on. During our investigation, we also found the complete verdict of Guwahati High Court on LiveLaw.in the website. It mentions that madrassas running with state government funds will be shut down from now on. A writ petition was filed in the Guwahati High Court challenging the Assam Repealling Act 2020 brought by the Assam government for closure of Madrasa education in 2020. The petition filed by 14 people mentioned that Madrassa education should continue in the state. But at the end of the hearing, the petition was dismissed by a bench of Guwahati High Court Chief Justice Sudhanshu Dhulya and Justice Somitra Saikia. You can read this news by clicking the link here  –

This Judgement can be read by clicking here.

We can see a post on the Twitter profile of Assam Chief Minister Dr Himanta Biswa Sharma about this viral post. It also mentions that the Guwahati High Court has upturned the Act of 2020 to repeal Madrassa Education Provincialization Act brought by the state government and ruled that 397 provincial Madrasas be converted into general schools.

The report by The Economic Times also mentions the same.

Vishvas News contacted Rajibaksha Rakshit, Principal Correspondent of North East of Anand Bazar Patrika in this regard and shared this viral post. He told us that it is misleading. The Guwahati high court has not given its verdict to stop all madrassas in the state. Only state government-funded provincial madrasas will be closed. The madrasas running on a community basis will continue as before. In the final stages of the investigation, we scanned the Facebook profile of অসমৰ খবৰ page which shared this misleading post on Facebook. We found that the page is followed by 68592 people.

Conclusion: Vishvas News found in it’s investigation that the Guwahati High Court has not given verdict to stop all madrassas in the state as mentioned in this viral post. Only state government funded provincialized madrasas will be closed. So this viral post is misleading.