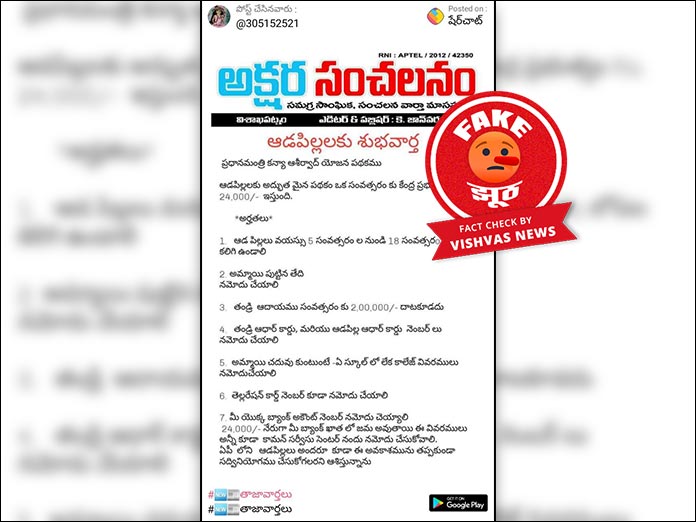 New Delhi. Vishvas News. A viral post on social media claims the central government provides Rs 24,000/year for girls under the Pradhan Mantri Kanya Ashirvad Yojana Scheme. Vishvas news found the claim first on Whats app. We found several posts on twitter and videos on Youtube with around 3K views. Further investigations revealed that there is no such government scheme called Pradhan Mantri Kanya Ashirvad Yojana existing under the state or central government.

A viral post on social media claims the central government provides Rs 24,000/year will be deposited in the bank account for girls aged between 5 and 18 under the Pradhan Mantri Kanya Ashirvad Yojana Scheme. The archived post can be accessed here.

When we searched on the Internet, we could not get any official sources or websites about the Pradhan Mantri Kanya Ashirvad Yojana Scheme.

The Ministry of Women and Child Development under the government of India has 15 schemes and there is no mention about PM Kanya Ashirvad Yojana.

We also found many videos and websites warning people to not believe rumours about this scheme.

A website that gives insights on government schemes and scholarships Dihupoly.in has stated that no state government or central government has operated any scheme called Pradhan Mantri Kanya Aashirwad Yojana

According to an article on education blog Police results has stated, “Do not trust the eligibility, benefits, registration process, online application process or any other type of information as it has not been confirmed by any government or state government till date.”

While Vishvas News contacted the Ministry of Women and Child Development, an official said, “We don’t have any schemes as stated in the claim. The information in the post is fake”.

He clarified that government provides a deposit scheme for girls under the Sukanya Samriddhi Yojana that provides highest rates of interest.