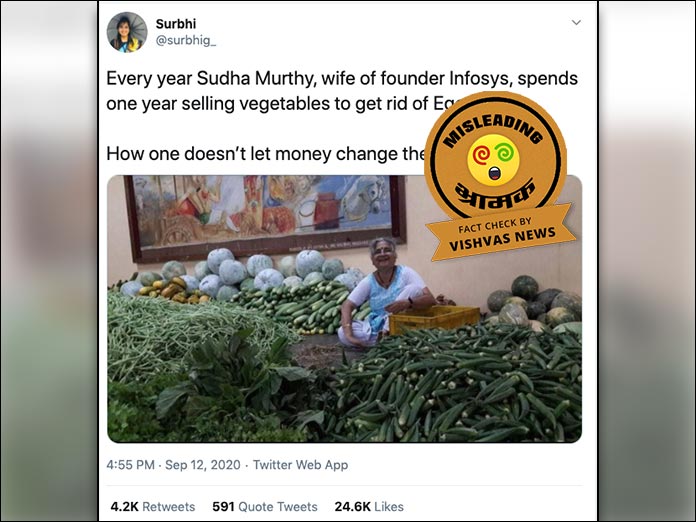 New Delhi( Vishvas News) A viral picture on social media claims Sudha Murthy, wife of N.R Narayana Murthy, and co-founder of Infosys, is selling vegetables at Sri Raghavendra Swamy Mutt in Jayanagar, Bengaluru. We found the claim first on Twitter and then on Facebook.

Vishvas News investigation revealed the claim to be misleading. Murthy was not selling vegetables in the Mutt. However, she was participating in the Seva programme by volunteering to maintain the storage facilities.

Twitter user ‘Surbhi’ posted the viral picture with caption “Every year Sudha Murthy, wife of founder Infosys, spends one year selling vegetables to get rid of Ego. How one doesn’t let money change their values.”

The same picture is viral with more or less similar claims on various social media platforms.

When we searched on the Internet, we found news reports about Murthy rendering service in the Raghavendra Mutt.

According to an article in the Times Of India, “Three days in a year, the lady … wakes up at 4 am and heads to the Raghavendra Swamy Temple. Sudha Murthy, wife of Infosys founder Narayan Murthy, cleans the kitchen and the adjoining rooms; washes the dirty utensils, dusts the shelves, chops the vegetables, takes inventory stock, sweeps the yards and empties the trash cans.”

We found another article on a Kannada News website that quoted her saying, “I went to plant flowers at the Venkataramana temple in Tirupati. There is such a chance once a year.”

However, we could not find any news about Murthy selling vegetables anywhere.

We searched the image using Google reverse image search tool and found an article on Kannada Oneindia website published in 2016.

We could confirm that the woman with vegetables in the viral picture is Sudha Murthy. However, she was not selling vegetables as claimed in the viral posts but volunteered to serve as a store manager for three days during the Aradhana Mahotsavam.

We contacted Vadeendrachar RK, the manager of Sri Raghavendra Swamy Mutt in Jayanagar, Bengaluru for confirmation. “Mrs Murthy was not selling vegetables. The viral claim is fake. She was helping in sorting the vegetables during the Aradhana Mahotsavam,” manager said.

Twitter user Surbhi is one among many users who shared the viral claim and social scanning of her profile revealed that the account is active since August 2018 and has 4,191 followers.

Conclusion: Infosys Chairperson Sudha Murthy is not selling vegetables at Raghavendra Swamy Mutt in Bengaluru. The viral claim is misleading.